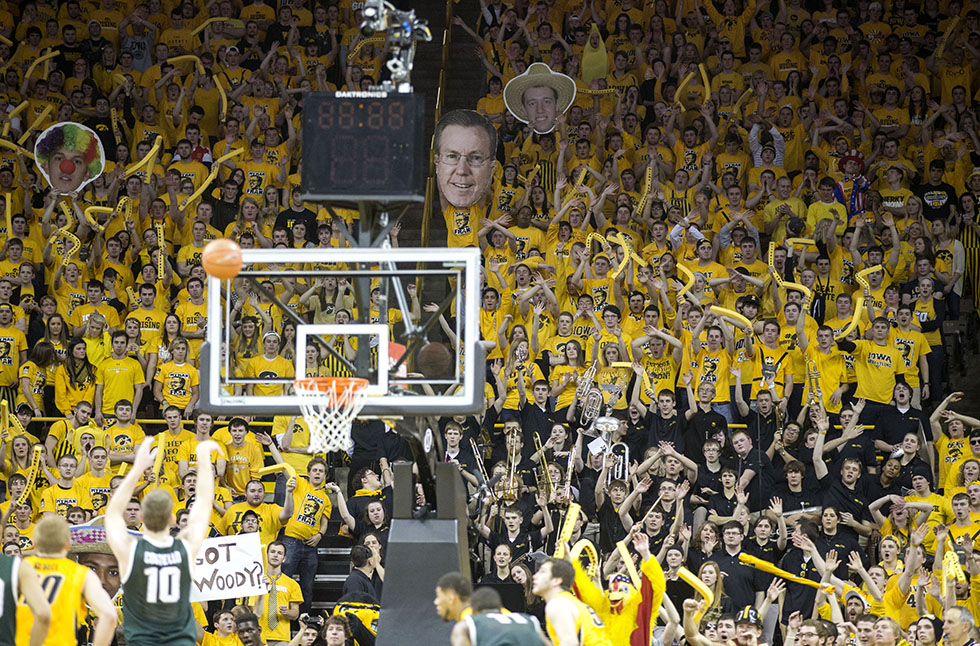 The Hawks Nest tries to distract Michigan State Spartans forward Matt Costello (10) as he shoots free throws during the second half of their Big Ten Conference college basketball game Tuesday, Jan. 28, 2014 at the Carver-Hawkeye Arena in Iowa City. (Brian Ray/hawkeyesports.com)

Carver-Hawkeye Arena is an imposing place to play men’s basketball, as roughly 78 percent of the time the visitors go down in defeat after playing Iowa there.

A good part of any home team advantage comes from home team fans, and especially the Hawkeye band, cheerleaders and students who usually make the most noise and offers the most distractions to opposing players trying to inbound a pass or shoot a free throw. And when it comes to free throws, Iowa leads the way among Big Ten teams this season making more than 3-out-of-4 attempts.

As positive as these stats are, Hawkeye fans may need to do more to rattle opposing teams during crunch time this month. In Big Ten home games so far this year, opponents have shot 79 percent – and Michigan State even hit 95.2 percent (20 for 21) back on January 24 in Iowa City.

When I attended games in the Iowa Field House in the 1970s, a Hawkeye wide receiver/tight end named Brandt Yocom used to give Iowa such a home court advantage. Sitting close to half-court up in the rafters, Yocom would find an opportune moment or two in games he attended to unleash his soo-ey pig yell. He was extremely effective in rattling opposing players, and Yocom would even perfect his yell so much so that he performed it on TV’s Gong Show.

Iowa students may want to take a cue from Arizona State University and its so-called “Curtain of Distraction.” When opposing teams try free throws, they face a student backdrop that includes twerking farm animals, kissing unicorns, an old lady yelling at you to get off her lawn and more. It’s harmless theater, but statistics bear out a 1- to 2-point home team advantage per game based on opponent’s free throw misses.

Think about what that could mean in a tight game!

A Look at the Hawkeyes 2019 Recruiting Class