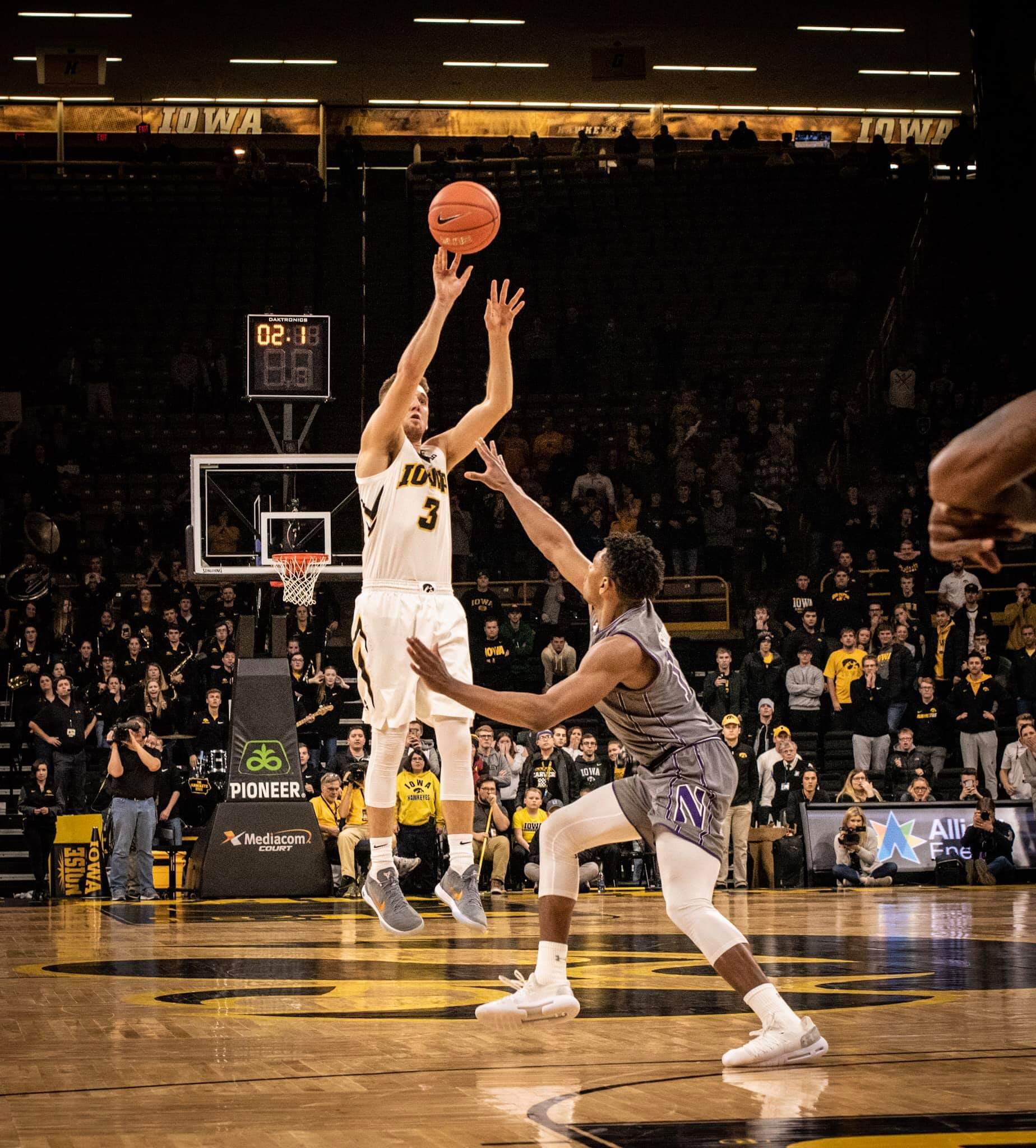 The Hawks had no business winning this game, yet somehow, they found a way to gut out a W that will be remembered for years to come.

For 36 minutes the Hawks played lackluster basketball to say the least. There were early airballs, head-shaking turnovers that slipped through players’ fingertips, and numerous close misses at the rim to go along with a largely abysmal defensive performance. But, when it truly mattered, the Hawks were able to overcome their ineptitudes and erase a 15-point deficit in the last 5 minutes as Mr.-Ice-In-His-Veins Jordan Bohannan sank a dagger three-pointer with less than a second to go.

If you recall from the Hawks last outing at Indiana on Thursday, Bohannon put the game away by scoring the final 11 points. And once again Bohannan came through in the clutch. In fact, up until the 5:30 mark of the second half Bohannon and Garza were held scoreless. However, while Garza finished the game with zero points after another game plagued by foul trouble, Bohannon racked up 15 points in the game’s final 6 minutes to go along with 3 assists.

Nonetheless, this game was surprising for more than one reason. Although the Hawks stormed back and sank a game-winner in stunning fashion, coming into the game everything suggested the Hawks should coast to an easy win. Having already beaten the Wildcats by 10 earlier in the season at Welsh-Ryan arena in Evanston, you might have thought that a home date with the 12-10 (3-8 in the B10) Wildcats would be a cake-walk. I know I did. After all, in the Wildcats previous three games—all losses—they failed to score 60 points. As 10-point home favorites, logically you would have thought the Hawks would take care of business and win going away.

But, games aren’t played on paper, especially in the tough and tumble Big Ten Conference. In the B10 you have to bring it every time you step on the court. Just ask the one-time undefeated (in Conference play) Michigan State Spartans who recently dropped a game to the 9-15 Illinois Fighting Illini.

So maybe we shouldn’t have been surprised that the Wildcats showed up. Right from the get-go they made it clear that they weren’t going to be salted away like a midwestern roadway this time of year. The Wildcats corralled the opening tip and quickly got set on controlling the Hawks as they leaped out to 41-35 halftime lead behind 19 points (5-6 on 3s) from senior star Vic Law.

41 first half points for a team that averages just under 68 a game on the season? How did the Wildcats manage to run-up the score? Well, shooting 15-30 (50%) from the field certainly helped. Yet, it was rebounding that gave the Wildcats their edge. They hammered the Hawks on the class outrebounding Iowa 21 to 10 with a 6 to 1 offensive rebound advantage.

On the Iowa side, early on in the first half it was the Weiskamp and Moss show. Together the duo scoed 14 of the Hawks’ first 16 points and Weiskamp led all Hawkeye scorers with 12 at the half-time break.

On a side note, how does Joe Weiskamp not have a nickname yet? Given his last name—pronounced ‘Weez-camp’—might I suggest Wheezy? Regardless of whether the freshman phenom gains a nickname, he has to be in discussion with Michigan’s Ignas Brazdeikis and Indiana’s Romeo Langford for B10 Freshman of the Year. The stats back it up. To date, Wheezy is averaging 11.5ppg and 5 rebounds while shooting 44% from behind the arc.

Anyhow, in the second half while Wheezy chipped in 9 more points to finish with a team high 21-points on 7-10 shooting, it was Tyler Cook who garnered the most attention. Possession after possession the Hawkeyes looked to get the ball inside to Cook. Knowing that Cook is a foul magnet, this philosophy paid dividends for the Hawks as Northwestern was whistled for foul after foul. In fact, Iowa was in the bonus with 12 minutes to go.

However, the game plan of ‘get the ball to Cook’ also had its downside. Despite his best effort, Cook struggled to convert near the rim going just 5-13 from the field. And while overall Cook did net 9 of his 13 free throws, he did miss the front end of a 1-1 twice. Moreover, with the ‘get the ball to Cook’ mentality, the rest of the Hawks failed to get into a second half rhythm.

To make matters worse, the Hawkeye defense continued to give up easy bucket after easy bucket to the Wildcats as Northwestern extended it’s lead to 15 with 4 minutes and change to play.

Plain and simple, 36 minutes into the game, the Hawks’ prospects of pulling this one out looked about as bleak as the weather forecast (a winter storm is forecast to hit Eastern Iowa Monday into Tuesday). But something spectacular happened in the final 4 minutes. The Hawks did everything they needed to do to crawl back into the game. They made their free throws, they knocked down some must-make 3s, and they got the pivotal stops to give their selves a chance.

Up by one, yes just one after being up 15 a few minutes earlier, Northwestern’s Vic Law stepped to the free throw line with 10 seconds to go and made one of two free throws pushing the Wildcat lead to two. Then, the magic happened. After a kicked ball call, with 3 seconds to left in regulation Connor McCaffrey inbounded the ball to Bohannan at the top of the key and Mr.-Ice-In-His-Veins did his deed, swishing a deep 3 with just fractions of a second remaining on the clock. It wasn’t quite over after the Bohannon 3 though. Northwestern big-man Derek Pardon managed to get off a decent shot attempt at the buzzer that nearly went in, but it ended up careening off the back of the iron.

They say that good teams find a way to win, even when they don’t play well. So, if you believe that cliché then this win serves as evidence that the Hawks are a good team. At 19-5 (8-5) in the B10, I think it’s fair to say the Hawks have rightfully shown they’re a good team.

Although streaky, the Hawks have thus far put together an impressive resume with wins over top 20 team Iowa State and Michigan. All the while, the Hawks have avoided a ‘bad loss’ to a poor team. Now, the Hawks are on another streak, a 3-game win streak after having dropped two tough ones in a row to Michigan State and Minnesota. And taking a more birds-eye view, since the Iowa State game December 10th, the Hawks have strung together two 5-game winning streaks to go along with the current 3-game winning streak; all the while losing only 3 games amidst the aforementioned 16-game stretch.

So just how are things looking for the Hawks NCAA tourney prospects?

Well, baring a complete collapse down the stretch, the Hawks appear to be firmly in the NCAA tournament. In fact, the Hawks still have a chance at a top 4 seed in the NCAA tournament which brings with it the opportunity to play a near home game at Wells Fargo Arena in Des Moines. However, even if the Hawks finish the season on a tear and avenge their B10 tournament demons (Iowa has won one B10 tourney game in the last 5 years), the Hawks could find their selves not playing in Des Moines despite securing a top 4 seed.

According to reporting by HawkCentral’s Mark Emmert, while the selection committee does use geographic proximity as a factor in determining seeding, due to NCAA tournament seeding protocol, the selection committee looks to avoid putting teams that have played twice in a season in the same bracket. Therefore, the Hawks will likely be vying with teams like Wisconsin and Michigan State for a spot in Des Moines.

Having lost to the Spartans twice in the regular season, in a head to head comparison the selection committee would almost assuredly choose the Spartans over the Hawks. Yet, with a March 7th tilt at Wisconsin still on the schedule, a win against Bucky Badger could theoretically give the Hawks an upper hand if the selection committee were to be faced with the choice of placing the Hawks or the Badgers in the bracket with first/second round games in Des Moines.

Projections—such as those by famed bracket guru Joe Lunardi—currently have the Hawks landing anywhere from a 4-6 seed in the tournament. So, even though the Hawks are 19-5 and (8-5) in the B10, if the want to play in Des Moines they have their work cut out for them. They can’t afford many slip-ups against down the stretch or another early exit from the B10 tourney.

Nonetheless, if the Hawks win 5 or more of their 7 remaining regular season games—with one of those wins being against #19 Wisconsin (AP/Coaches)—and win at least one game in the B10 tourney, they should have a shot at landing a game in Des Moines.

For now though, the Hawks must take it one game at a time. They seem to be well on their way to their 26th NCAA tournament appearance, but the B10 conference is a bloodbath and literally any team can beat any other.

The Hawks are trending in the right direction and it certainly helps that multiple players have proven they are capable of stepping up. Moss, Weiskamp, Cook, and Cook have all netted 20+ point games this season while both Kreiner & Baer have shown they’re capable of making crucial contributions at times.

Sadly, we’ll have to wait nearly a week to see the Hawks in action again when the head to Piscataway, New Jersey for a 5pm Saturday tilt against a Rutgers team that has now dropped 3 in a row after previously stringing together 3 wins in a row.

In the meantime, if you need some Hawkeye sports to get you through til next Saturday, I’d recommend watching the Iowa women’s’ team’s 7pm tilt against Illinois at Carver on Thursday (if you don’t have other plans for V-Day). Led by all-time great Megan Gustafson, the women have won 8 of their last 9, including a 26-point blowout win at Ohio State today. At present they’re just one game back in the B10 standings meaning every game is crucial for them as the march toward a B10 Conference championship.

Or if you’re still looking for your Hawkeye sports fix, you could also head to Carver Friday night for the wrestling team’s Senior Day battle against Indiana. Chances are it won’t be as emphatic as this past Friday’s 48-0 drubbing of Maryland, but it still should be entertaining. You can be assured that the seniors will be motivated to go out on a high note.