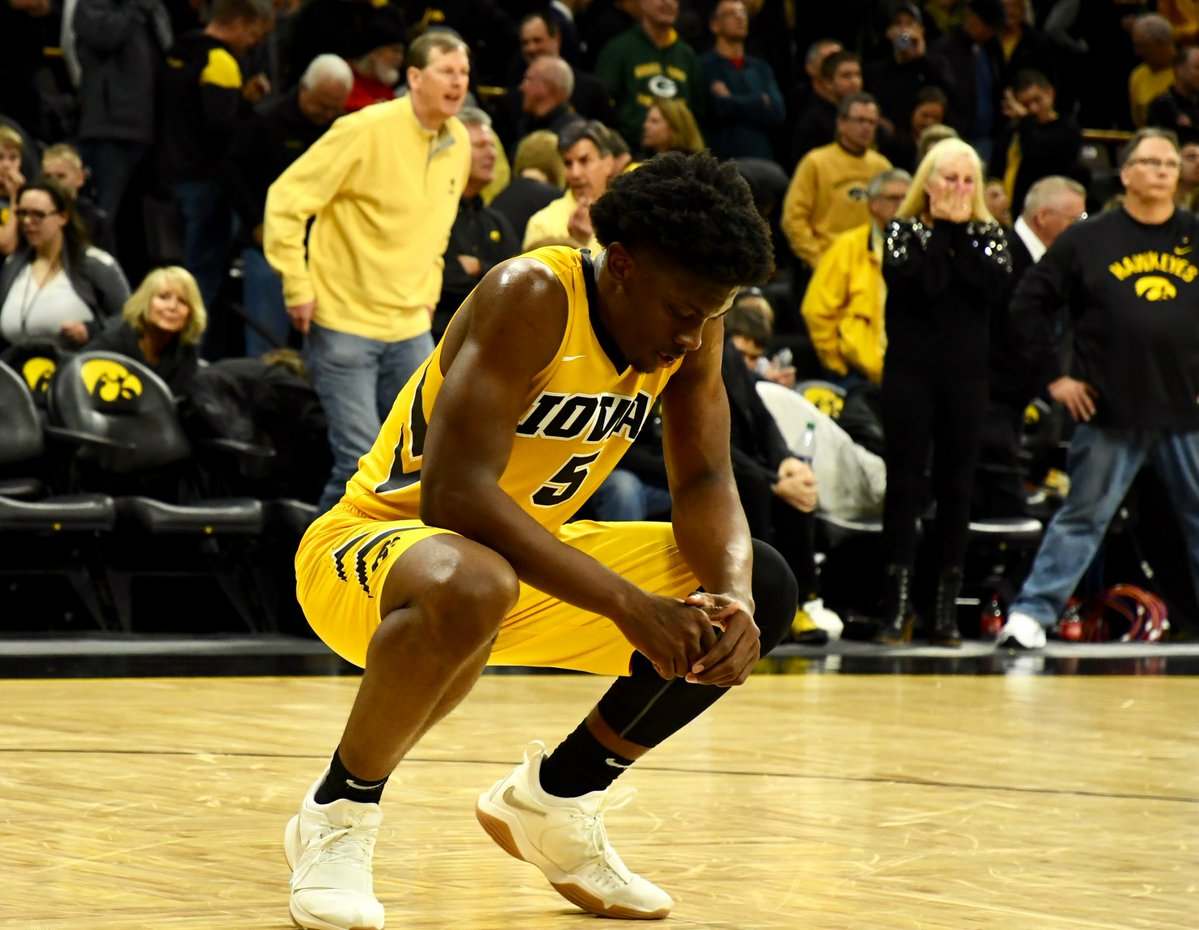 IOWA CITY, Iowa – At least we can say the games at Carver-Hawkeye Arena are exciting.

Shots from Jordan Bohannon and Tyler Cook didn’t fall on Iowa’s last possession to finish off what is the second straight home game the Hawkeyes have lost by one possession. Nicholas Baer’s half-court heave versus Michigan State 11 days ago nearly forced overtime.

Back at Carver, the Hawkeyes played another close and exciting game. But again, they couldn’t pull it off. Indiana captured its fourth straight win with the 84-82 win over Iowa on Saturday, sending Iowa to its fifth loss in a row.

Iowa was just 10 seconds and one made bucket away from an extra five minutes of basketball. It’s impressive that the Hawkeyes were even able to get that close in the first place.

Iowa never trailed in the first half and started the game on one of the most remarkable runs you’ll ever witness. The Hawkeyes made each of their first 10 shot attempts and recorded assists on every single one of them. Bohannon alone had six assists in the game’s first four minutes.

“They showed right away offensively how talented they are, how skilled they are,” said Indiana Head Coach Archie Miller of the Hawkeyes. “We just didn’t really have a lot of answers there for a while.”

After the first sucker punch, Indiana slowly chipped away for the rest of the half and trailed by just three at the break. It was after halftime that Indiana stole all of the momentum.

Robert Johnson led the Hoosiers on a 12-0 run, lighting it up from three-point range. Johnson set a new career-high with 29 points on 9-of-12 shooting from beyond the arc. Regardless of the colors you watched the game in, you had to be impressed with Johnson’s performance.

“Our closeouts were not effective enough, and it was pretty obvious who was hitting shots,” McCaffery said. “For some reason we did not ever figure out that you can’t stop short when Robert Johnson’s on fire.”

Iowa has struggled to locate shooters on defense multiple times this season. Johnson is the latest and greatest example.

Johnson and the Hoosiers grew their lead to as many as 13 near the halfway point of the second half. It was there that Iowa got a lift from some unlikely sources.

Held scoreless in the first half, Bohannon made a pair of back-to-back threes to get the Hawkeyes back on track and get the fans involved. Bohannon missed his next three in transition, but Ahmad Wagner hustled down the floor for a rebound and layup.

Bohannon’s shots were made possible by solid defense and a few steals, mostly from Ryan Kriener. Kriener played just six minutes (all in the second half) but provided a huge boost.

Kriener played sound defense against Indiana’s Juwan Morgan on a pair of possessions, and came up with three steals in his limited time. He contributed to another one with a deflection that was reeled in by Bohannon.

“We had more of a defensive lineup on the floor that stretch,” McCaffery said. “Kriener, Ahmad Wagner, Nicholas Baer. That lineup with Cook and Bohannon was probably the most effective.”

The run put Iowa back in a position for the win, and the teams went back and forth in the final four minutes. Iowa made just one of its final seven shots as Indiana held on for the close win.

Tyler Cook was phenomenal, particularly later in the game. Cook finished with 28 points and 10 rebounds, and Indiana was forced to send double-teams at him. Freshman Luka Garza also had a quiet 17 points, most of which coming in the first half. The young big man continued to make strides on Saturday.

With the exception of identifying three-point shooters, Iowa played a decent game defensively. Iowa stuck primarily with the zone and the Hoosiers were stifled by it multiple times, particularly in the first half. McCaffery also acknowledged that teams are going to get a fair amount of open threes when you play a zone, but the Hawkeyes didn’t expect Johnson to make nine of them.

Iowa turned the ball over 17 times, which more often than not is too many if you want to win in the Big Ten. The Hawkeyes excelled in other areas including a free throw percentage of 86 (19-of-22) and a rebound advantage of 33-18.

With the loss, it looks all the more likely that the Hawkeyes will have to play on day one of the Big Ten Tournament as just two regular season games remain. Even if they win them both, the Hawkeyes will need some help.

Minnesota first plays at Wisconsin on Monday night. That came can be seen on Fox Sports 1 at 8:00pm CST.