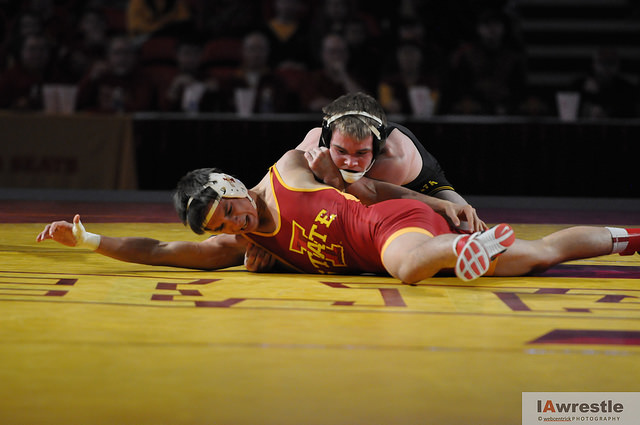 The historic in-state rivalry between Iowa and Iowa state will continue with its latest installment of the series this Sunday afternoon at Hilton Coliseum. It will also be the first meeting between the two programs since the new coaching staff (comprised of all former Hawkeyes) took over in Ames. Iowa State hasn’t beaten the Hawkeyes since 2004, and never during the Tom Brands era. On paper this looks to be a blowout for the Hawkeyes, but there are a few matches the Cyclones could be competitive.

Starting off at 125 lbs we’ll have #4 Spencer Lee taking on Sinjin Briggs. Spencer is a heavy favorite on paper and this looks to be 6 team points for the Hawks given Briggs results against ranked competition.

Moving up to 133 lbs the Hawks will have Paul Glynn taking on Markus Simmons for the Cyclones. This will be one of the tossup matches on paper. Neither man really having that marquee win under their belt yet, they look to be on pretty even footing.

At 141 lbs, we’ll have either Carter Happel or Vince Turk possibly taking on #13 Ian Parker for the Cyclones. However, Parker has been missing duals recently and ISU has been forfeiting the weight. If he goes it could give either Happel or Turk the ability to crack into the national rankings and build some positive momentum heading into the B1Gs. Parker would be the slight favorite on paper, but you have to wonder if his lingering injury would play a factor in the match.

At 149 lbs #2 Brandon Sorensen will be taking on one of the bright spots for the ISU lineup this season in Jerrett Degen. The Night of Conflict alum has had some flashes this season in battles with some ranked foes, but has usually come out on the losing end. Going up against a guy like Sorensen will be no easy task. Sorensen could get bonus here depending on how wide open Degen decides to wrestle.

Moving on to 157 lbs we’ll have #2 Michael Kemerer taking on Chase Straw. This should be a bonus opportunity for the Hawks with the undefeated Kemerer. He hasn’t been close to losing a match thus far this season and his run should continue here.

At 165 lbs we’ll have #3 Alex Marinelli taking on former Hawkeye wrestler Skyler St. John. Skyler transferred this off season to be with his older brother Derek, who is now a member of the Cyclone staff. This looks to be another big bonus opportunity for Iowa, and Marinelli should clean up here with a major or tech fall coming fresh off his upset win over the defending National Champ Vincenzo Joseph.

Moving up to 174 we’ll have either #18 Joey Gunther or Kaleb Young taking on Danny Bush. This looks to be a match that the Hawks are favored on paper, especially considering performances against common opponents. There is bonus potential here, but a decision victory would be the safe bet.

At 184 lbs we’ll have Mitch Bowman taking on Dane Pestano. Pestano will be looking to close out his Cyclone career with a win on his home mat, and Bowman will want to gain some good momentum going into the post season. These two are pretty evenly matched, and they both have similar losses to common opponents this season. The home crowd could be a big factor, and might swing this one in Pestanos favor.

On to 197 lbs we’ll have #8 Cash Wilcke up against Sammy Colbray for the Cyclones. Wilcke looks to be the favorite on paper, but Colbray was a big recruit coming out of High School and has shown flashes this season with upsets over ranked wrestlers. I think this will still be a close decision win for Wilcke but stay woke on the upset potential of Colbray.

Closing out the dual at 285 we’ll have #5 Sam Stoll taking on Marcus Harrington. Harrington has grown into a heavyweight during the offseason for ISU and being a smaller, quicker heavyweight could pose some problem for Stoll. However I think Stoll superior handfighting and control ties won’t leave him very vulnerable for attacks. Stoll should cruise to a decision victory here, but Harrington has the tools to make this competitive.

If you’re into computer projections, WrestleStat has projected Iowa to win the dual 32-6 over the Cyclones.