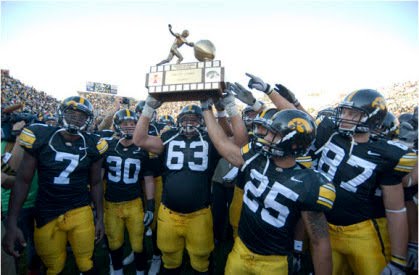 Altoona, IA –  I’ll be the first to tell you that I had no idea on how the original Cy-Hawk Trophy came about until I watched this clip. It’s actually pretty neat how it came about.

Conceived and created as a traveling trophy by the Greater Des Moines Athletic Club in 1976, the trophy was first presented to the winner by Iowa Governor Robert D. Ray in 1977. That game was the first meeting between the two since 1934. The trophy was replaced after the 2010 game, making Iowa and Iowa State the only schools in the country to sell out a rivalry trophy for corporate sponsorship.

And of course, we know Iowa leads the all-time series 43-22.

Miles Taylor and Josh Jackson Come Through On Their Promise