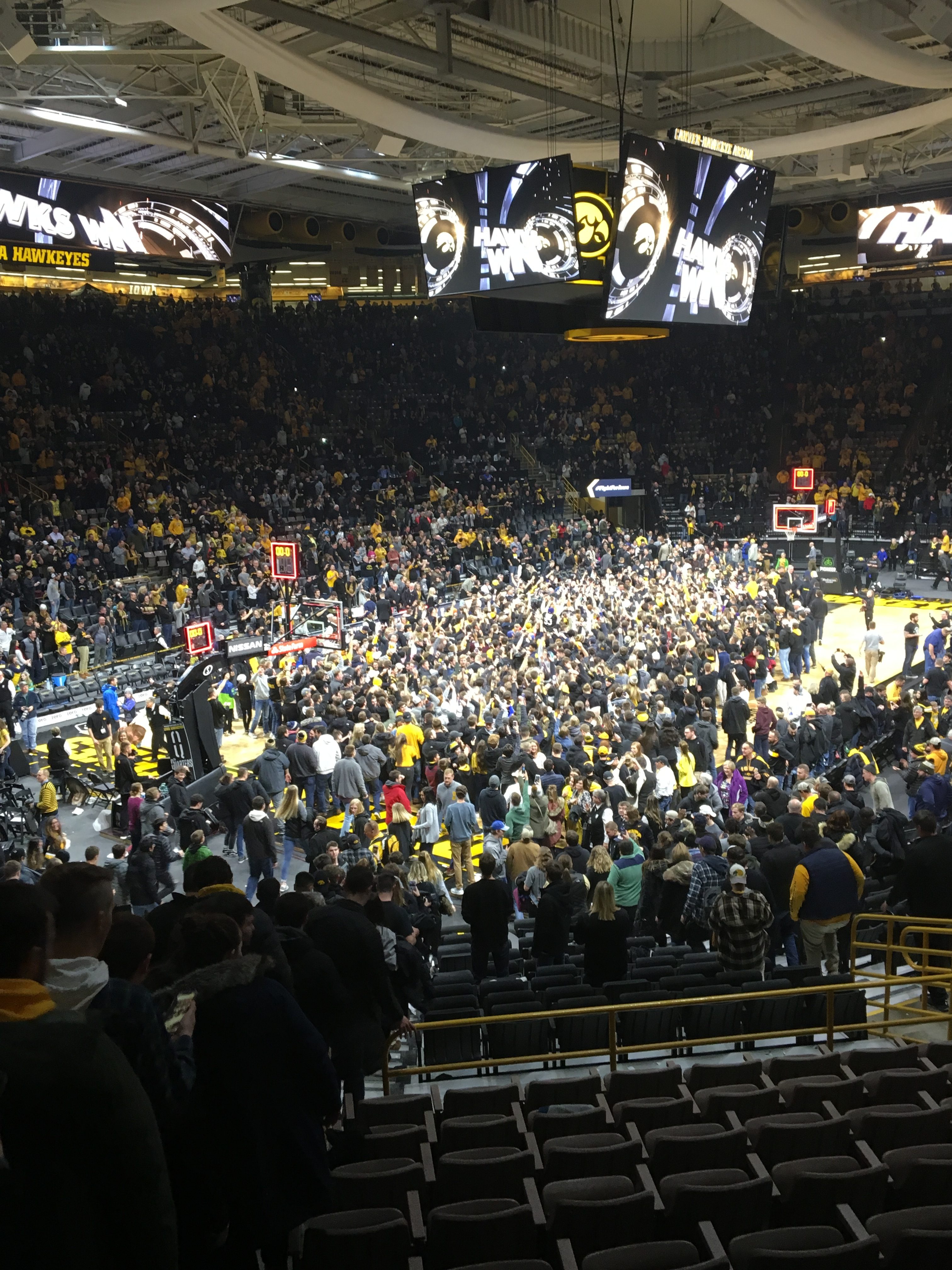 The #25 (Coaches Poll) Hawks finally nabbed the signature win they’ve been searching for all season as they downed the #5 Michigan Wolverines 74-59 in Friday night in front of a raucous, sold-out Carver Hawkeye Arena for the annual ‘Black & Gold Spirit Game’.

Right from the get-go the Hawks took it to the Wolverines with a level of aggression comparable to the first 25 minutes of last week’s Michigan State game and the last 5 minutes of this past Sunday’s Minnesota game. However, the difference this time was that the Hawks were able to sustain their momentum all game long as they gashed the #2 ranked Michigan defense all night long.

The first half was a bit of a foul-fest with the Hawks racking up 9 fouls and the Wolverines committing one more, at 10. Nonetheless, aside from the fouls the first half was a relatively clean game with only 6 total turnovers between the two teams.

How then did the Hawks go into halftime with a 13pt lead over the Big Ten leading Wolverines who’s only previous blemish was a hard-fought loss at Wisconsin? Two things stood out. First, the Hawks were tenacious on the glass, out-rebounding the Wolverines 26-12 with six offensive rebounds to Michigan’s one. And second, although the weather in Iowa City may have final warmed up, the Wolverine’s shooting sure didn’t. In the first half the Wolverines shot just 32%. How bad was Michigan’s shooting? Well, if you take away Jordan Poole’s 11 points and Iggy Brazdeikis’ 12, the rest of the Wolverines’ team went a horrid 2-15 from the field!

On the Hawkeye’s side, Tyler Cook asserted himself immediately, attacking the lane and drawing a bevy of foul calls. Channeling his inner Lebron James, Cook registered 7 first half points. Meanwhile, with Luka Garza in foul trouble, Ryan Kriener stepped up big-time with 11 points and 7 boards. To boot, Weiskamp chipped in a team-high 12 on 5-7 shooting from the field.

Luckily, after the half-time intermission, the Hawks didn’t relinquish their lead like they did last week during the crushing 82-67 loss to #6 (AP Poll) Michigan St. In fact, after securing the lead just past the under 12 minute first half TV timeout, the Hawks never relinquished the lead at all. Michigan did cut a 15 point second half lead down to five with under 10 minutes left. But 10 hard-fought points by sophomore standout Luka Garza interspersed with a mesmerizing Joe Weiskamp and-one layup quickly shot-down any hopes Michigan had of mounting a comeback. For those who managed to watch the game, they know this one was never in serious doubt. The Hawks kept their foot on the gas pedal and Michigan’s shooting remained poor.

When you breakdown the final box score, the numbers don’t lie. Iowa edged Michigan in nearly every statistical category. Michigan shot just 32% for the game and a wince-worthy 8-33 from the behind the arc while the Hawks shot over 45% from the field, including 43% from 3. From the charity stripe, the Hawks once again made a living making 16 on 24 attempts compared to Michigan’s 9 of 12. Rebounding evened out a bit, yet by the end of the game the Hawks still posted a sizable 48-36 advantage on the glass.

As you dig a little bit deeper into the box score, the Hawks did the little things right too with 7 steals, 5 blocks, and no technical fouls. Plus, the Hawks bench game to play, contributing 24 of the team’s 74 total points thanks to Ryan Kriener’s epic 15-point, 10 rebound performance. Meanwhile, the Michigan bench mustered a measly 3 points as all 5 of their starters scored at least 6 points.

With Kreiner’s career day, Garza’s streak of 4 straight 20+ point games barely came to an end as he notched only 19 points to go along with 8 boards. Isaiah Moss’ hot-streak appeared to come to an end too as he finished scoreless going 0-7 from the field. Iowa’s other guards, McCaffery, Bohannon, and Dailey combined for just 12 which usually would lead you to believe that things didn’t go the Hawks way. But, make no mistake, it was Iowa’s bigs that got the job done in this one. They took it to Michigan, attacking the paint all night long.

Now where do the Hawks go from here? Assuredly, the Hawks will rise in the NET rankings (the chief metric used for selection and seeding in the NCAA tourney). Prior to the Michigan game the Hawks sat at 27 with their only marquee win being against NET #15 Iowa State. Now, the Hawks have a win over NET #4 Michigan to complement their solidly-in NCAA tournament resume. At 6-5 in the Big Ten conference with 9 games remaining, all the Hawks should have to do is win 4 or more games to get to .500 in the Big Ten to make the big dance for the first time in three years.

The first step to doing so is beating a disappointing Hoosier team that has lost 7 in a row next Thursday in Bloomington. But for now, all of Hawkeye Nation should rejoice! It’s been 3 full seasons since the Hawks have knocked off a top-10 team in Carver. The women’s team lost a tough one to the Wolverines earlier today, but the men’s team got it done in emphatic fashion. With this win the Hawks showed that they are capable of 1) playing good defense, 2) playing a full 40 minutes, and 3) able to compete with and beat any team in the Big Ten.

With the two-game losing streak now in the rearview mirror, rest easy Hawkeye fans. February’s off to a great start and this team has the potential to prove they are a legitimate contender, not a pretender.

*All statistics provided by: www.espn.com/mens-college-basketball/game/_/gameId/401082410

Hawkeyes in the Super Bowl