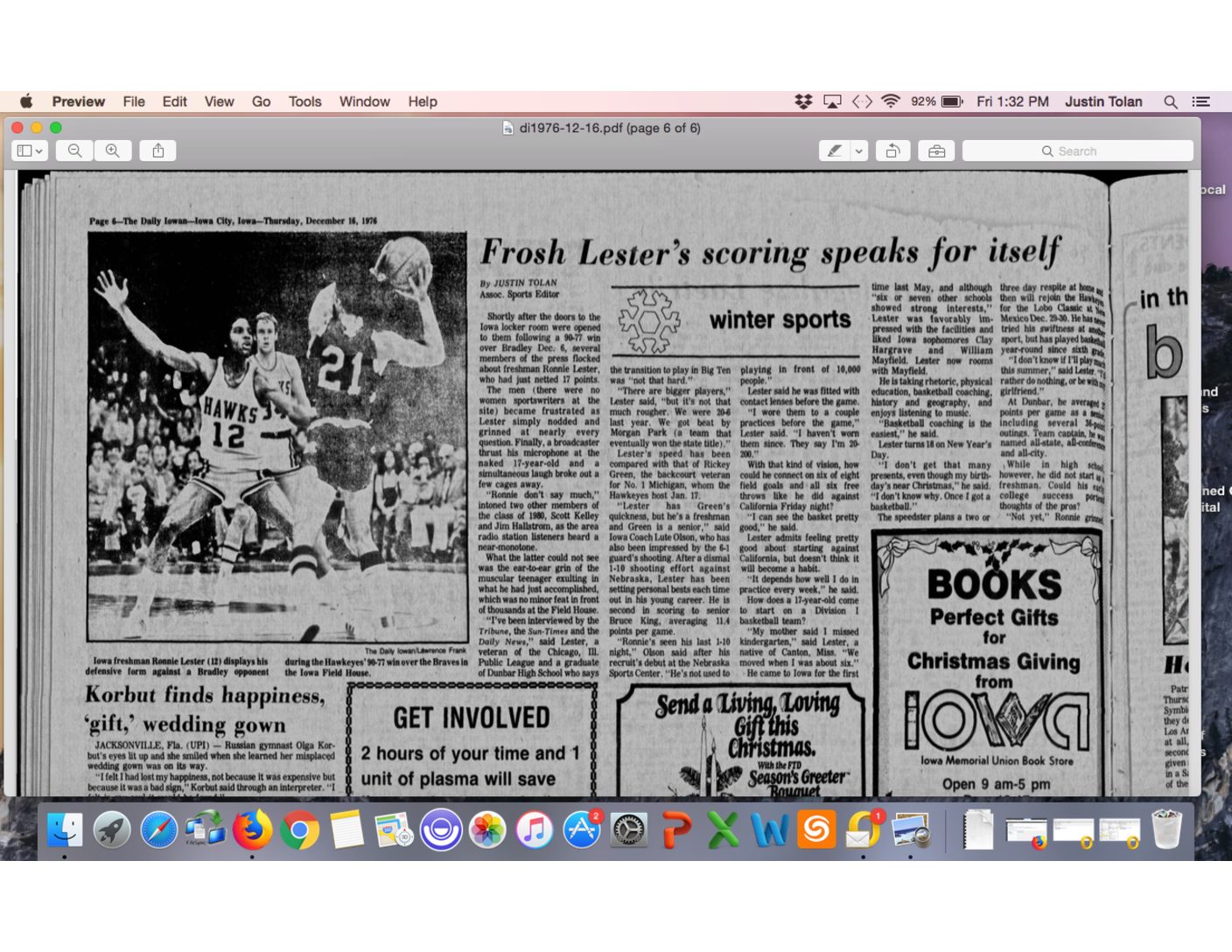 My story on Ronnie Lester

Who was the greatest Iowa basketball player of all time? You could name Carl Cain, John Johnson, Fred Brown and Roy Marble as strong options. Today many point to the women’s ranks, where current senior Megan Gustafson is going out with a record-setting career for Lisa Bluder’s team.

From my vantage point, it has to be Ronnie Lester. Former Coach Lute Olson said if Ronnie had stayed healthy, Iowa would have won the 1980 NCAA title—but instead it settled for the Final Four and an 8-point loss to Louisville in a game where Lester reinjured a bum knee. Lute called Ronnie the best point guard he ever coached, while Magic Johnson called him one of the best college players he ever played against.

In the fall of 1976, I was wrapping up my senior year’s first semester as associate sports editor of the Daily Iowan. I drew the fortune of landing the basketball beat because the sports editor opted to cover the powerhouse wrestling team. For a young scribe from Pocahontas, Iowa, getting to cover the Hawkeyes from half court in the old Field House’s upper deck was truly Hawkeye Heaven. What a difficult environment for opposing teams, not only with the walls and rafters ringing, but with Iowa Tight End Brandt Yocom saluting an opponent’s free throw shooter with a barn-shattering “soo-ey” pig yell at one or two opportune moments in games he frequently attended. (Yocom would later compete on the Gong Show, but that’s a story for another Hawkeye Heaven.)

Any writer or fan could see that the freshman Lester was special. Each night out, he was getting better as he gained confidence playing in front of larger crowds and even got fitted for corrective contact lenses. I first met Ronnie in his dorm room at Hillcrest. He was very quiet and looked so young, even to my 21-year-old self, and I made a note of pointing out his age of only 17 in the article. The other starting guard that season opposite Ronnie was 23-year-old Cal Wulfsberg, who would become Lute Olson’s son-in-law.

Ronnie could not have been any nicer to me and I wrote a feature story, which I titled “Frosh Lester’s scoring speaks for itself.” The morning it appeared in print deep into finals week on Dec. 16, 1976, I swung by the DI newsroom to check my mail and pick up a copy. Coincidentally, my roommate Jim Owen who wrote on the editorial desk, picked up a general desk call and forwarded it to me, only to say, “It’s Lute Olson and he wants to speak to you.” Of course, that had never happened before, so at first I thought Jim was pulling my leg. But it turned out to be legitimate, and both special and probably rare that Olson knew me and would even give the Daily Iowan preferential treatment in press conference questions over the Des Moines and Quad Cities media.

All kinds of thoughts went through my mind before I picked up the line. Was Lute upset that I listed Ronnie’s soft class schedule? Should I not have hinted at a pro career in Lester’s future? Should I have also mentioned Cal Wulfsberg in the article?

Instead, Lute could not have been any nicer. Basically, he wanted to call and thank me for the article (who does that these days?)! That, and could I send four or five copies in the campus mail over to him so that he could send some extras to Ronnie’s mother?

I became a bigger fan of Lute Olson that morning. And has there ever been a more affable, genuine and special men’s basketball player at Iowa than Ronnie Lester? You know my vote.