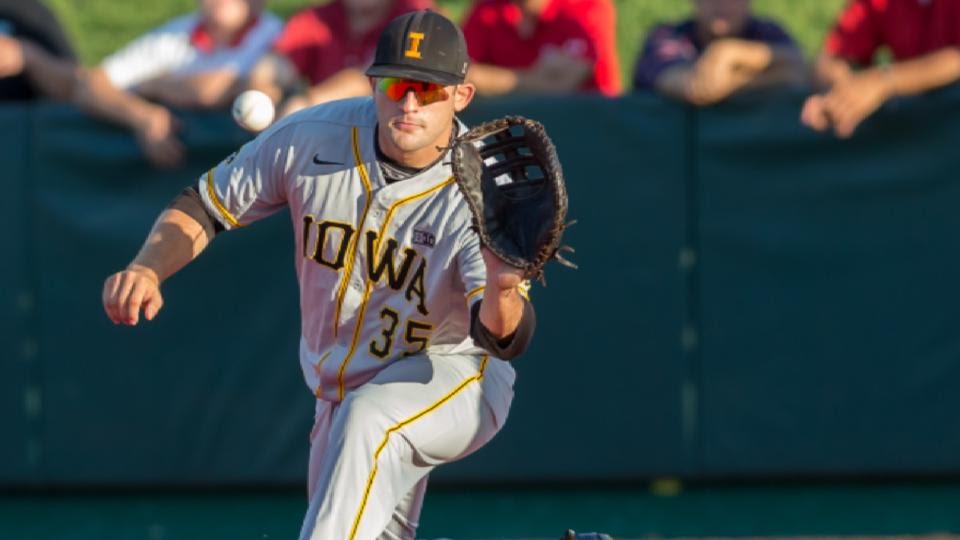 Former University of Iowa baseball player, Jake Adams, will start the 2018 minor-league season with the Quad City River Bandits, exactly one-hour from Duane Banks Field, the home of the Hawkeyes.

IOWA CITY, Iowa – Jake Adams is back on Iowa soil, except this time, he won’t be wearing black and gold, rounding the bases at Duane Banks.

The former UI first-baseman will start the 2018 minor-league baseball season with the Quad City River Bandits, just 60-miles from the field where he earned his claim to fame.

“It feels good knowing that I’m back in Iowa and I will have a lot of fans here to support me,” Adams said. “I’m glad that I get to come back to Iowa to play at least one more season.”

The Brandon, South Dakota native was selected in the sixth round of the 2017 Major League Baseball First-Year Player draft by the Houston Astros, making him the 181stpick and the highest draft pick for the Hawkeyes since 1999.

The 6-2 first-baseman was a hit at the University of Iowa (literally), ending his division-one career with accolades many players dream of achieving in four seasons, while Adams did it in one.

“The coaching staff [at the University of Iowa] helped me get to where I wanted to be,” Adams said. “They grew me as a person and better baseball player. They believed in my abilities to get drafted and pushed me to get better day-in and day-out.”

Adams’ draft came after the successful 2017 season the Hawkeyes had, where he led the NCAA and broke Iowa’s school record and Big Ten Conference’s single season record with 29 homeruns.

“The biggest difference [between NCAA baseball and professional baseball] is playing every single day with no breaks,” Adam said. “Getting used to playing every day and keeping your body healthy is important.”

Adams and the River Bandits have 140 games that stand between them and the Midwest League Championship game; that’s double the amount of games played in a NCAA season. Adams is hopeful the team will repeat as league champions.

“There are a lot of things I’m looking forward to this season,” Adams said. “We have a great group of guys and coaches where I know that it’s a possibility to do that again.”

The talented slugger started his trek to the big-leagues immediately after being drafted in 2017, playing 48 games, ending the short-season with 10 home runs under the Tri-City ValleyCats in Troy, New York.

Adams is hopeful to work his way up as far as possible in the minor league system this season.

“Always believe in yourself and keep pushing to get better,” Adams said. “No matter if people say you aren’t good enough or you don’t have a good enough swing, prove those people wrong. It only takes one scout to realize your potential and you will get to where you want to be.”

In 2018, Iowa baseball will still aim for their 5th consecutive 30-plus win season, however, they will have to do so without ace slugger Adams on their roster.

“The thing that I miss most about Iowa is the players and the bond that we all grew,” Adams said. “The fans were some of the best that I have ever played for throughout my baseball career. No matter if we won or lost, they still backed us up through it all.”

The Midwest League held their annual Opening Day on Thursday, April 5, which marked the start a four-game series against the Cedar Rapids Kernels at Veterans Memorial Stadium in Cedar Rapids.

The River Bandits hosts their first home stand of the season April 9-12 against Kane County.