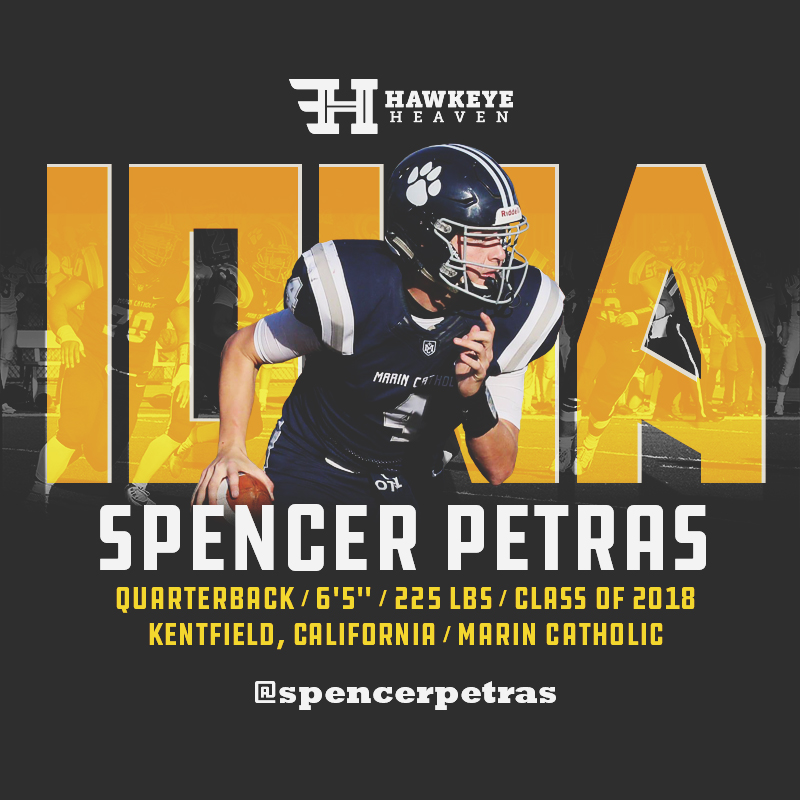 Iowa City, Iowa – Our team at Hawkeye Heaven is writing a series of articles where we highlight each of the 22 commitments Iowa received in the 2018 class. We’ll share each recruit’s highlights, and do our best to mention what jumps out at us about each player on tape. Then we will predict what kind of an impact we think they will make in a Hawkeye uniform. Up next is quarterback Spencer Petras.

Spencer Petras is a 6’5 225 lb quarterback who has traveled to Iowa City from Kentfield, California. Petras had been a verbal commitment to Oregon State, but after a coaching change and a new offer from Iowa, he decided to flip his commitment to the Hawkeyes. Along with Iowa and Oregon State, Petras also picked up scholarship offers from California, Nebraska, Louisville, Fresno State, Syracuse, Colorado State, Nevada, San Diego State, San Jose State, UNLV, and Wyoming during the recruiting process. Petras is listed as a 4-star quarterback on Rivals.

Glory be to God #Swarm18 pic.twitter.com/lihd…

Petras’ high school football coach had this to say about him:

“As a football player, he has unbelievable tools and talent. He is extremely powerful. Probably the strongest arm we’ve had at Marin Catholic, and [we] had the pleasure of coaching Jared Goff when Jared was here.”

You can see right away what his high school football coach is talking about with his arm strength on film. In the first 1:15 of the video he doesn’t throw a pass that’s shorter than 40 yards.There are a few times where he’s scrambling around and he flips the ball 40-50 yards with hardly any arm motion at all. You will also notice that he does a nice job escaping pressure and getting rid of the ball, which will be essential when he plays in the B1G.

In Petras’ junior season he threw for more than 3,000 yards. Think that’s impressive? His Senior season he took his game to the next level and threw for 4,157 yards, 50 touchdowns, and 2 interceptions. Following his senior season, he was awarded the All-Metro Bay Area Player of the Year.

Petras fits the mold of Nate Stanley with his 6’5′ 225 lb frame, which is likely to be even bigger by the time he steps foot on the playing field. With that being said, I expect for Spencer to immediately compete with Peyton Mansell for the #2 QB position, backing up Nate Stanley.

The ceiling is extremely high for this young man though, drawing comparisons to 2016 #1 overall draft pick, Jared Goff. I wouldn’t be surprised at all if he ends up being Iowa’s QB of the future. The good news is that he’s already on campus getting acclimated to the Iowa weather and putting in work under Coach Doyle. 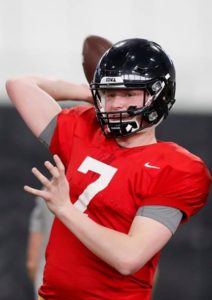 Welcome to the Hawkeye family Spencer!

Cordell Pemsl Next Hawkeye To Transfer?