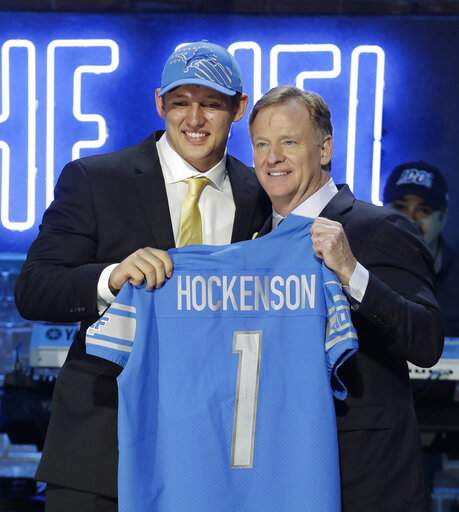 On Thursday night the Detroit Lions selected TJ Hockenson eighth overall, giving Matthew Stafford another weapon as they attempt to crawl out of the NFC North basement.

The Lions have not won the NFC North division title since 1993, when it was called the NFC Central. It has been a couple long decades for Lions fans. Matt Patricia and the Lions front office are looking for players to change the culture in Detroit. In Hockenson they are getting a player who does his job at a high level on the field while also providing a high character locker room presence. Hockenson is joining, offensive lineman, Andrew Donnal as the only former Hawkeyes on the Lions roster.

Hockenson know things won’t come easy to him at the next level, “Starting at the bottom of the totem pole, you’ve gotta work your way through it and earn the respect of everyone in the locker room, by going to work and doing everything you can, and I’m ready to learn.” With guys like Jesse James, Michael Roberts, and Jerome Cunningham on the roster, Hockenson arrives in Detroit as the favorite to start at tight end week one, but he’ll still have to earn it.

His ability to block inline sets him apart from the pass catching tight ends that will go later in the draft. Not only does Hockenson excel as a blocker, but he also has the ability to get down the field and create separation with his routes. He has soft hands which allow him to catch the ball and turn up field. For a guy his size, his yards after catch ability is impressive.

Hockenson is already being touted as potentially the next Rob Gronkowski or George Kittle. While these may be high expectations to put on a guy as young as Hockenson, if he continues to put in the work and grow as a player, he may find himself at that level before his career is over

In 2014 the Lions selected Eric Ebron tenth overall, ahead of guys like Aaron Donald, Odell Beckham Jr., and Zack Martin, with hopes he would turn into the next Rob Gronkowski. Fast forward four seasons and Ebron is no longer with the team and they are still searching for an offensive weapon to fill the void left by Calvin Johnson. With Hockenson on board they may have just found that guy.