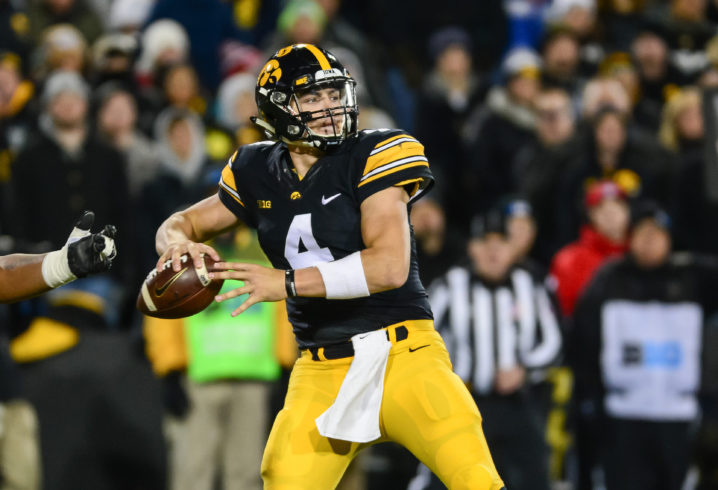 The 2019-2020 Iowa football season is 141 days away. However, with the ending of basketball season Hawkeye fans now shift their focus to the boys of fall. This years Iowa squad will be lead undoubtedly by senior captain Quarterback Nate Stanley. The 6’4 243 pound senior leader from Menomonie, Wisconsin has the chance to go down as one of the best Iowa Quarterbacks ever depending on this upcoming season’s accomplishments. Nate Stanley has already provided Iowa fans with multiple career highlights, the latest an Outback bowl victory over Mississippi State.

Stanley set an Iowa bowl record for longest touchdown pass when he completed a 75 yard touchdown to Nick Easley during the bowl game. However this is just one of an abundant amount of accomplishments throughout Stanley’s last two seasons as a full-time starter. Not only a leader on the field, but Nate is a two-time Academic All big-ten selection as well. 26 touchdowns this past season ranked Stanley 2nd in the big ten, a conference with solid Quarterback play. 52 touchdowns in two years is the best two year total of any Iowa Quarterback. One of Two Iowa quarterbacks to throw for 5 or more touchdowns at least 3 times in their career. The other QB to do so was legend Chuck Long.

These are only a few of Nate’s accolades, there are many more. However, I did not want to write an article only stating statistics. The point is, Stanley is already one of the best to ever take snaps at Iowa. However, this upcoming season he could truly separate himself from those before him. Stanley is currently sitting at 9th all time in career passing yards at a total of 5,351. Chuck Long is 1st at 10,461 total yards. Stanley catching this record set by Chuck is not going to happen. Especially with the departure of top targets Noah Fant and TJ Hockenson. A 3,000 yard season would be difficult, but is possible as last year his total marked 2,852 yards. If he achieves the 3,000 yard benchmark he could possibly move up to 2nd all time in that statistic.

A notable record that is very attainable for Stanley is the passing touchdowns statistic. He will have a shot at the career touchdowns record, single season, and the single game record as well. As it sits today, #4 has 52 career touchdown passes. He needs 23 more to break Chuck Long’s record of 74. Yes, Stanley has a very realistic opportunity to be the Iowa Hawkeye touchdown passing King. Last year Stanley recorded 26 touchdown passes, if he increases that mark by 2 he will also set a single season record. These two records (Both currently held by Chuck long) have not been re-written in 34 years. (3 plus Decades!) If the offense begins the season connected and receiving options develop, Nate Stanley will go down as one of the best passers in Hawkeye history. I believe that breaking these records will be no easy task, but they may need to be achieved if Iowa is going to have an elite season.

Brian Ferentz will need to put ultimate trust into the senior Quarterback to obtain these lofty stats. The expectations will be high around Iowa City for this years squad, but most know you can only go as far as solid Quarterback play takes you. Getting back to the Rose Bowl and winning the division are team goals that Stanley must accomplish to help separate himself. I firmly believe Nate has the skill set and with another year in this pro-style offense he will be as comfortable as ever. Keeping interceptions at a minimum and developing better deep threat passing accuracy are main things to watch in Stanley’s game.

Nate has been a joy to watch on Saturday’s but his performances throughout the upcoming season will dictate not only Iowa’s success, but his own possibilities at the next level. NFL Experts and scouts already had him on the NFL radar after last season. In the mean time, Senior quarterback is fully committed to helping the Hawkeyes win a Big Ten Title.

Will the Senior captain lead the Hawkeyes to new heights?