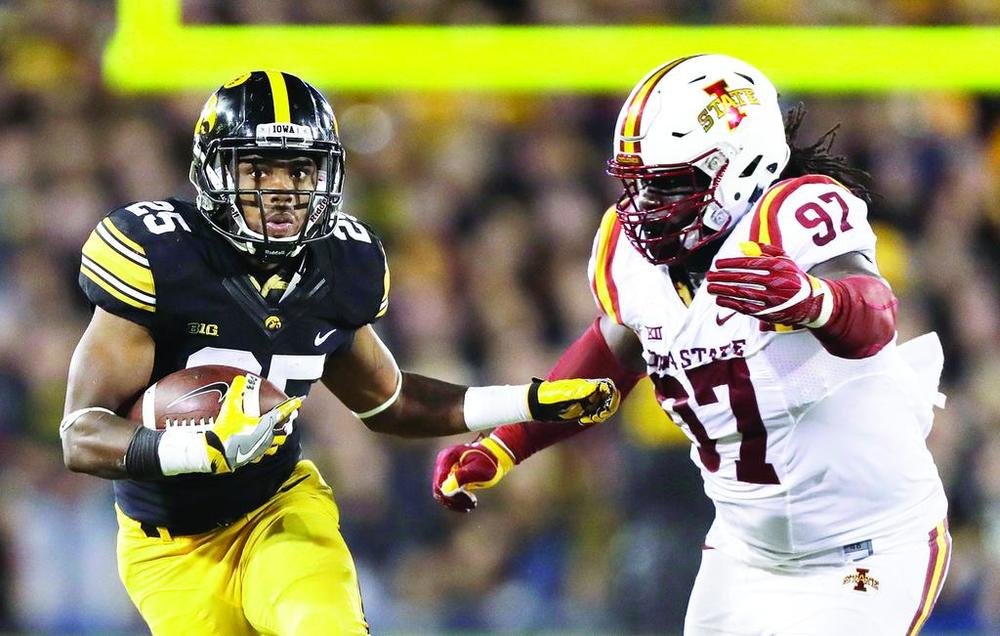 Iowa City – During spring ball the Iowa running back situation looked like most years. Everyone knew senior Akrum Wadley was the starter and after that were his backups. Wadley would carry the load, redshirt freshman Toren Young would fill the shoes of graduate LeShun Daniels, and the offense would go on business as usual. That shifted when graduate transfer James Butler chose Iowa.  Now the backfield will feature two NFL caliber running backs. Splitting time while meeting yardage goals will be a challenge.

“I want 1,400 yards by the end of the season,” Wadley said after the spring game. “I feel that’s a step up from a thousand. I want to be able to go in a positive direction.”

Achieving his goal of 1,400 yards is more than possible as a single back. With the addition of Butler, who rushed for over 1,300 yards in the two previous seasons, the chances of hitting 1,400 drop.
Iowa has supported multiple 1,000 yard rushers once before. Last year, Wadley and Daniels ran past the 1,000 yard mark becoming the first Hawkeye duo to do so. Neither made it to 1,100 yards.
Butler has expressed that it is Wadley’s team. That doesn’t mean he will willing accept a regression in his stats. Realistically, 1,400 yards is a reasonable goal for him as well.

In 2016 at Nevada, Butler carried the ball 260 times to reach his total of 1,336 yards. Daniels led Iowa with 213, 47 less than Butler had. Wadley reach his mark on 168 carries. Only Butler put up numbers eligible to believe he could get to 1,400.  Between the two backs, splitting carries won’t be difficult. The greater challenge is getting enough carries to reach the stated goal.  Wadley averaged 6.4 yards per carry and Butler 5.1 yards per carry last year. Assuming they hit those numbers again, the two Hawkeyes will need to rush 494 times to reach 1,400 a piece.  Combining for 500 or more carries between the two running backs is a difficult task. Only Tulsa, a non-power five team, did it a year ago. If any team in the Big Ten could do it, Iowa is the team.

Utilizing the run to relieve pressure from an inexperienced quarterback plus an award-winning offensive line can open the door, literally, for Butler and Wadley. They can both get to 1,400 yards but it will take a team effort to do so.  Young and sophomore Toks Akinribade will fill out the depth chart at running back. Akinribade got a few touches last year and Young only in the spring game. Seeing them on the field will be rare.

This upcoming season at running back will be the Wadley and Butler show.