Iowa City, IA – LaVar Ball took the nation by storm last year as his son, Lonzo, was playing basketball for the UCLA Bruins. LaVar has since then made/done some outrageous things. He has started an athletic brand with prices that would make Donald Trump cringe, he has said that Lonzo Ball was going to lead the Lakers to 50 wins this season and recently he said that he is starting his own basketball league.

Some quick background so you know why he is doing this. LaVar has two other sons named LiAngelo and LaMelo. LiAngelo started his freshman year at UCLA this season, but had some legal issues while his team was over in China so the UCLA program suspended him indefinitely. LaVar would pull him out of UCLA. His other son, LaMelo, was a very sought after recruit. His shooting abilities are off the charts, but his dad pulled him out of high school to jump into a basketball career. LaVar was so fed up with the way college basketball operated, that he sent his sons to Lithuania to play basketball professionally.

That is the reasoning for LaVar starting the Junior Basketball Association.

The idea behind this league is that highly rated high school basketball players who recently graduated from high school can come get paid instead of going to college and being a student athlete. The league is looking for 10 teams with up to 80 players in the league. These 18-year-olds could make anywhere from $3,000 and $10,000 per month.

The first round of invitations was extended to many college athletes recently. 2018 Iowa recruit, Joe Wieskamp, received an invite.

Every Iowa fan knows of Wieskamp’s abilities by now. He scores at will for Muscatine High School. He is a four-star shooting guard and is the 9th ranked shooting guard in his class, 42nd overall player. It was recently announced what Wieskamp’s decision is.

The Iowa native is staying loyal to the Hawkeyes, and I’m sure that he will be appreciated next year when Carver is cheering for him.

Here is the message that was sent to these high school athletes: 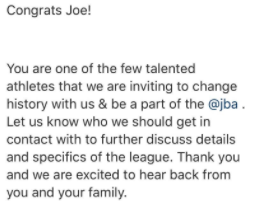