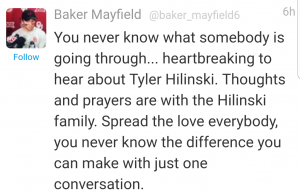 Iowa, City, IA – The Washington St. football program received devastating news on Tuesday as one of their players was found dead. Redshirt sophomore, Tyler Hilinski, did not report for a workout on Tuesday. Someone would then go check on Hilinski, but his body was found with a suicide note. Hilinski had started the bowl game last month for the Cougars at quarterback and it was believed that he was going to lead the team next season. Hilinski was found with a rifle next to his body and a gunshot wound to his head. Tyler Hilinski was just 21-year-old.  Our thoughts and prayers are with the Hilinski family.

Sean Welsh has played for the Iowa Hawkeyes football team since 2013. He announced last summer that he had been dealing with depression for a few years. Welsh announced this with Kirk Ferentz by his side. He said during this announcement that his biggest opponent in life was depression. Welsh has figured out a routine to deal with his depression. He will be graduating from the University of Iowa later this spring.

Many athletes and celebrities have suffered from depression:

Michael Phelps – “I remember sitting in my room for four or five days not wanting to be alive, not talking to anybody. That was a struggle for me … I reached that point where I finally realized I couldn’t do it alone”

Brandon Marshall – “I spent three months in the outpatient program at McLean, and in my time there, I learned the tools and skills to help me cope with my emotions. I learned different meditation techniques, and I spoke with doctors and counselors about what I was feeling to get a better understanding of where my emotions were coming from and how I could most effectively react and respond to them….Those three months changed my life.”

Dwayne “The Rock” Johnson – “I found that with depression one of the most important things you could realize is that you’re not alone. You’re not the first to go through it… I wish I had someone at that time who could just pull me aside and say, ‘Hey, it’s going to be okay.’”

350 million people around the world suffer from this disease every day. Many people who are depressed are afraid to speak out on the issue. If you or anyone you know is suffering from depression, call the National Suicide Prevention Lifeline at 1-800-273-8255 or text 741741.

Time To Turn It Around

No Comeback Bid This Time Around for Hawkeyes