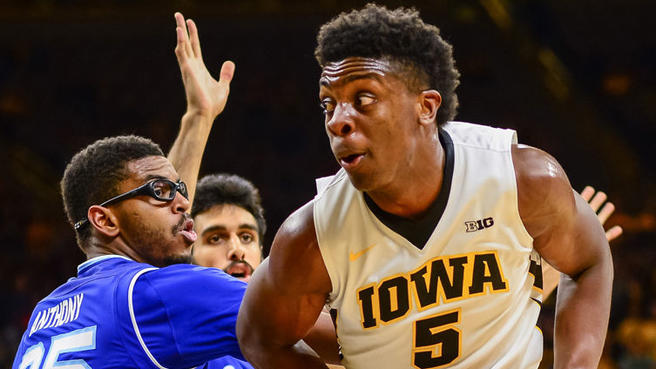 Tyler Cook was not chosen in the NBA draft, but that doesn’t mean that all hope for Tyler has come to an end. We learned that Tyler is battling an ankle injury in which he sprained during a workout with the Detroit Pistons. However, that did not stop the Denver Nuggets from signing him to a deal that guarantees him a spot in training camp with the team.

This bit of news is discouraging for Cook because he will be unable to participate in the NBA Summer League, which not only would help his shot at making the Denver Nuggets roster, but also would give him live game tape of him squaring off against other players similarly aged for all 29 other franchises to breakdown.

However, it is positive news that Denver was willing to give him a promised spot in training camp despite Cook being sidelined with the injury. The team already has 11 guaranteed contracts heading into the off-season, and both two-way deals already accounted for. A two-way deal allows a young player to play a majority of the year with the G-league affiliate, but be eligible for call-up to the NBA team when needed.

The Nuggets roster will feature Bol-Bol, who was taken in the 2nd round of the NBA draft.  The roster also features another young big man in Jarred Vanderbilt, who was taken with the 41st pick a few years ago. Michael Porter Jr. returns healthy after missing a majority of the year, and veteran big man Paul Milsap’s contract expires, but he could still be brought back to the club. It seems as if Vanderbilt is already the developmental big club for the Nuggets, so Cook seems to be in a battle with him for that last roster spot.