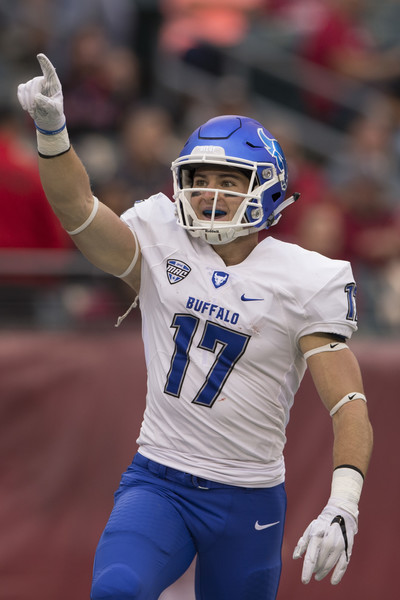 Jack Combs of Central Michigan and Charlie Jones from the University of Buffalo are the newest Hawkeyes in the 2019 group of transfers.

In his red-shirt freshman season, Combs stepped onto the field five times for the Chippewas, hauling in three balls for 27 yards and a single touchdown. All of those receptions came in their final match up versus Toledo in a 51-13 loss. Combs stepped onto the Michigan football scene as a senior, grabbing 40 receptions for 801 yards and 10 touchdowns for East Grand Rapids High.

With the lack of film and production from Combs at the division one level, it is difficult to tell as to what his role will be in Iowa City.

Also competing most recently as a red-shirt freshman, Jones made more of an impact for the Bulls. The Deerfield, Ill. native was able to finish the season with a total of 18 receptions in 14 games for 395 yards and three touchdowns. The highlight of Jones’ season came in the second game of the year, where he grabbed three passes for 63 yards and a touchdown in a 36-29 win over Temple. Also utilized as a kickoff returner, Jones ran back 15 kickoffs for 289 yards.

Jones is coming from an air-it-out offense with quarterback Tyree Jackson, who was ultimately picked up by the Buffalo Bills as an undrafted free agent. With the big-armed Jackson at the helm, Jones’ speed and route running ability were showcased well for the Bulls, and could be utilized in the future for the Hawkeyes.

It has yet to be determined if the two receivers will apply for immediate eligibility in 2019, as it is unlikely that Iowa will need the pair to fill any holes in the offense right away.