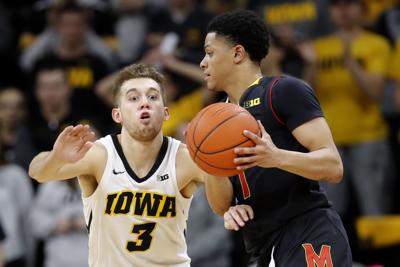 Iowa basketball fans are becoming way too familiar with late game heroics. But tonight if you had a Magic 8 Ball and asked it, “will Iowa once again pull out a last second victory?” Unfortunately, it’s answer would have been, “Don’t Count It.” As the #24 ranked Maryland Terrapins escaped Carver Hawkeye Arena with a rare road victory over a ranked team, beating the #21 ranked Iowa Hawkeyes 66-65.

Iowa came into this game on a 4 game winning streak, but had to win the last two games in thrilling fashion. Could they keep riding that late game magic? Or could Maryland come into Iowa City and get a victory over a ranked team on the road for the first time since 2008? Mark Turgeon is 0-19 against ranked teams on the road in his 8 seasons as Maryland’s head coach. Last year these two teams only played once, and Maryland dominated the Hawks 91-73. Big man Bruno Fernando had 21 points and 7 rebounds and Tyler Cook, Iowa’s inside man was held in check with 7 points, 1 rebound and fouling out.

The first half was sluggish by both teams. Uncharacteristic turnovers and missed shots dictated the flow. By the 16:00 timeout, Iowa was 1-8 from the field and Maryland was 0-3. It wasn’t until the 13:21 mark when Maryland hit their first field goal. But unfortunately Iowa could not build a big enough lead. “We struggled offensively, give Maryland credit for that. We didn’t make shots we normally make in the first half,” Iowa Coach Fran McCaffrey said. Maryland would make their next 4 three pointers in a row to take a 21-20 lead. The Hawks had a couple of good chances but missed 2 front ends of one-and-one free throws and Maryland took a 27-23 lead into the half. Maryland started 2-13 from the field but finished 6 of their next 13 to finish the half. Iowa just shot 2-10 from beyond the three point line.

Iowa’s struggles and sluggish ways continued to open the second half. They started just 2-11 from the field and Maryland had a 42-30 lead. Iowa was trailing 51-43 with 8:10 remaining when Jordan Bohannon hits a three pointer to make it 51-46 and the crowd at Carver finally had something to cheer about. But Mark Turgeon wisely used one of his timeouts, sensing the momentum shift. A couple of missed shots by the Hawks and Maryland drills 2 three pointers and the lead is back to 11 for the Terps with 6:00 left. But Iowa would claw it’s way back, benefiting by being in the double bonus, Bohannon hits 3 free throws, Weiskamp hits 2 free throws and Nicholas Baer nails a three pointer, Iowa’s late game magic was ramping up and they took the lead 61-60 with 2:31 remaining. Their full court pressure defense gave Maryland fits, just like it did in the Northwestern comeback, as evident by the 10 second violation with 1:33 left in the game. With Iowa leading 63-62, Maryland’s big man Bruno Fernando, held in check in the first half due to two fouls, gets an offensive rebound and gets fouled by Baer. The 75% free throw shooter nails both free throws and Maryland leads 64-63. On Iowa’s next possession, Bohannon gets fouled and calmy hits both free throws and Iowa retakes the lead 65-64 with 18.8 seconds left. Maryland put the ball in their best player’s hands for their last possession, upperclassman and leading scorer Anthony Cowan Jr. He took the ball, and drove the lane as three Hawkeye defenders feverishly tried to deny the winning layup, the ball came off the rim, and Fernando was there for the easy tip in with 7.8 seconds left. Maryland now leads 66-65. For the third game in a row, the game was going to be decided on a last second shot by the Hawkeyes. Could they do it again? They were going to put the ball in the hands of their most reliable late game hero, Jordan Bohannon. Bohannon got a decent look from the top of the key for the winner, but it bounced off the front of the rim. Isaiah Moss was there for the rebound, but his put back before the buzzer did not go in, and Iowa’s late game luck comes to an end, Maryland pulls off the 66-65 road win.

“I thought I got fouled on the play, ” Bohannon said. “We had two shots at it and it didn’t go in. I thought Isaiah got fouled too.”

“I thought it was going in,” Maryland coach Mark Turgeon said, “but it bounced our way tonight.”

Maryland’s record is now 20-7 and 11-5 in the Big Ten and Iowa falls to 20-6 and 9-6 in conference. Iowa shot 32.8% from the field, their worst of the season and 8-26 from three. Bohannon had 14 points, but only hit 2-11 shots and 2-7 from three. Moss chipped in 12 points. The biggest head scratcher was Tyler Cook only getting 4 field goal attempts and 0 free throw attempts, scoring 6 points and grabbing 5 rebounds. Iowa forced 17 Maryland turnovers but only converted that into 8 points. Iowa got 26 points off their bench. Maryland was lead by obviously the best player on the court, Anthony Cowan Jr. He had 17 points, 8 assists, and only 1 turnover in 40 minutes. Fernando finished with 11 points, 11 rebounds, 5 offensive boards with the most crucial one coming on that last tip in.

A very good defensive effort tonight by the Hawks, but poor shooting was their downfall. They’ve skated by the previous two games and had to pull out come from behind victories against lower echelon Big Ten teams. That double bye in the Big Ten Tournament looks like it’s getting farther out of reach, as Maryland grabs that 4th place spot and the tiebreaker over the Hawks. They have a very short turnaround as Indiana comes into Carver Friday night. Indiana is really struggling, losing 11 of 12 games, and they just lost tonight to Purdue, with a tip in by their center with 3 seconds left. Sound familiar? At least the last 3 games have been exciting! Go Hawks!

Hawks Look to Bounce Back vs. Hoosiers