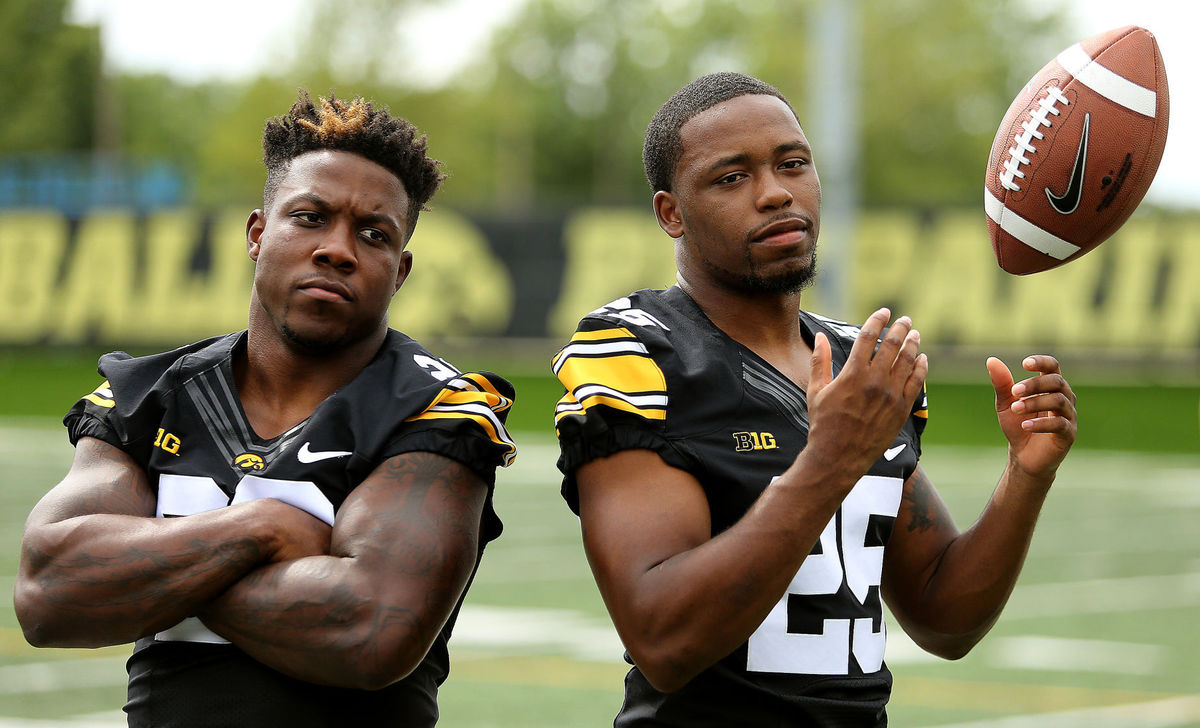 IOWA CITY, IA – Hawkeye fans have been spoiled with the performances from our past running backs. From the great Shonn Greene, to the ever-elusive Akrum Wadley, the running back position is a favored one by Hawkeye fans everywhere.

The run-game for the Hawkeyes is a sacred one. Well, I don’t know about sacred since pretty much everyone knows that it’s what we are best at. Although, Nathan Stanley has shown the potential to scare off box-loading defensive coordinators. The run game will be a huge key if we want to see a successful 2018 season.

Wadley finished his senior campaign with 252 carries for 1,109 yards. It was his second season rushing for over 1,000 yards, as he rushed for 1,081 yards in 2016. Butler finished his senior year with 91 carries for 396 yards. He had a quiet year for the Hawkeyes, due to being out a couple games with an elbow injury. Still, we can’t forget his outstanding totals that he had while at Nevada. During his sophomore and junior year at Nevada, he rushed for a combined 2,681 yards. That is 1,340.5 yards in both seasons. Wow.

Although Butler’s performances didn’t stuff the stat sheet, his presence was a physical one. Wadley had the finesse which would make defenders look like they forgot how to walk. Both had their own styles of running. Both will be missed, but as college sports go, it’s ‘next man up’ time. 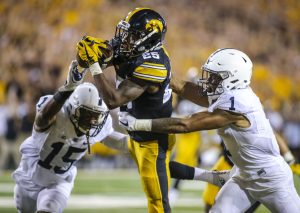 Young came off a pretty quiet season in 2017, solely on the fact that Wadley and Butler were our primary ball carriers. He was just coming off his redshirt year, as well. But don’t let the low numbers fool you. This player has some power and violence when he runs.

With a small frame, he either has speed or strength. Lets just say, Young has a got a solid mix of both. He stands at 5’11”, but weighs in at 220 lbs. With the stature that Young has, he will most likely be running through opponents or at least falling forward. We saw his strength in a few goal-line touchdown runs this season.

His final stat line for 2017, was 161 yards off of 34 carries. His average was 4.7 yards per carry. Not bad for a young guy with little playing time (no pun intended).

We could see him being a part of a powerful ‘1-2 punch’ that Iowa has always seemed to have. He could replicate Butler’s physicalness, but with a little more speed. This next guy has a pretty solid chance to be another great Iowa running back. 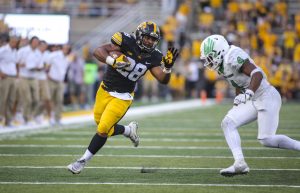 Toren Young (#28) prepares for a hit from a North Texas defender. (PC: The Quad-City Times)

Thinking about the potential that Kelly-Martin has should get you excited for next season. Although the glimpses we had were sparse, he made them count. He has the speed, and shows some impressive agility as well.

With the same height as Young, Kelly-Martin stands at 5’11”. However, he is a little lighter than Young, weighing around 195 lbs. Don’t let any of that fool you though, if the hole is there, he is going to follow.

The true freshman finished the season with 94 yards of off 14 carries. He also finished with two touchdowns. He could also be a viable option in the pass game, which Wadley was exceptional at. He caught four passes and totaled 25 receiving yards. He also returned kicks this season. Of course those numbers aren’t anything to brag home about, but for a true freshman to come in and put up anything productive, it’s a bonus.

As stated earlier, Ivory Kelly-Martin has the potential to be on the list of great Hawkeye running backs. Another offseason to mesh with Stanley and the offensive line will help him tremendously. 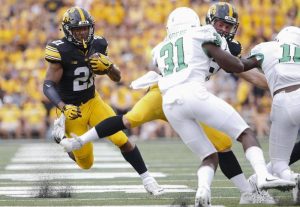 The loss of Wadley and Butler will hurt, but these two players should weaken the sting. Better yet, they should exceed our expectations. We cannot get our hopes up, though. After all, everything good is worth waiting for. The development of these two backs will take time, and a lot is still to be proven. We won’t get a good taste until opening day for the 2018 season, but we shouldn’t panic on whether or not the running back position is in good hands.

The future of the ground and pound style of play looks pretty bright for the Hawkeyes.

Hawks Take on Gophers at Home