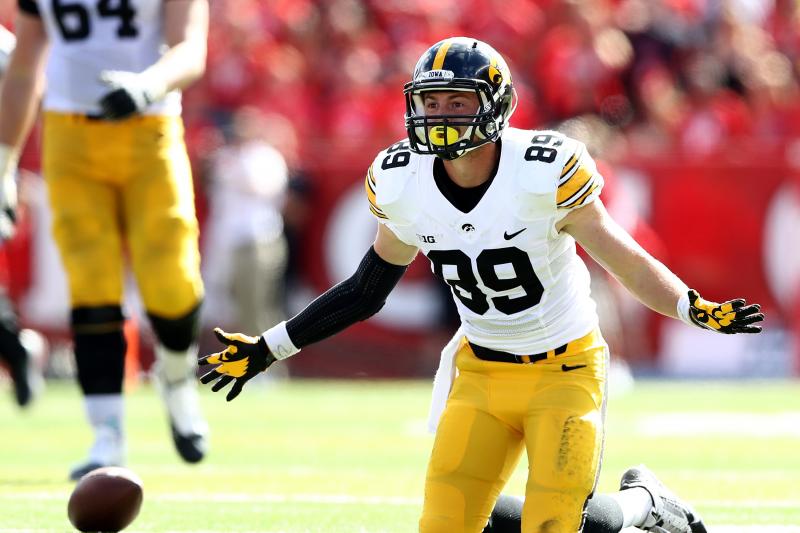 IOWA CITY, IA – While Iowa is known for its old-style, ground and pound type of play, the Hawkeyes have always needed a receiver or two to compliment the running game. Matt VandeBergs numbers may not have wowed you, but his contributions to Iowa Football were exactly what the style of play needed.

Not to mention, VandeBerg is the only Hawkeye to play 54 games in the black and gold. That onto itself can describe the level of dedication he had for this program.

As I noted earlier, VandeBerg didn’t put up gaudy numbers, but when the numbers were needed, he was there. When a big catch was needed often times he was there. He totaled 1,686 receiving yards throughout his Hawkeye career on 134 catches.

His best season was during the magical 12-0 run with CJ Beathard at QB. He hauled in 65 receptions for a total of 703 receiving yards and 4 touchdowns.

Although his production squandered in 2016 due to a foot injury that benched him, he was able to receive a 5th year from the NCAA. During the 2017-18 season he had 28 catches for 384 yards, and 2 touchdowns.

VandeBerg’s leadership and determination was evident every time he represented the Hawkeyes. He is the type of player that Hawkeye fans remember as the definition of Iowa Football, and leaders like him are always hard to replace.

However, the Hawkeyes will have to find a replacement. They don’t have a choice. As Kirk Ferentz would say “That’s football”. Now let’s take a look at the candidates.

Sophomore Brandon Smith from Mississippi is probably the most intriguing option at wide receiver next season. He didn’t see the field much as a freshman thanks to some common rookie mistakes, but there’s no doubt the athletic ability is there.

Standing at 6’3” and 205 pounds, Smith could be a handful for defensive backs next season. His big play attitude that he had during his high school years can’t be a distant memory for him. He wasn’t looked at by many of the bigger schools in the south. You can be sure that’s a chip that he’ll always wear on his shoulder. 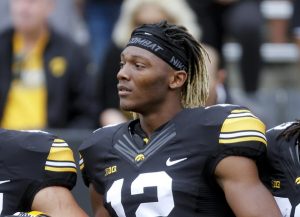 Brandon Smith looks onto the field during Iowa vs. Wyoming // Quad-City Times

Smith is likely looking to prove himself this year, as young playmakers are always striving to do. When he jumped onto the recruiting radar for the Hawkeyes fans were instantly excited. Iowa doesn’t typically land many wide receivers with his combination of size, speed, and athleticism. He has a long ways to go to live up to that hype, but he has a year of experience under his belt and he could be poised for a breakout season.

Sophomore Max Cooper could be the next Matt VandeBerg when talking about stature and style of play. Standing at 6’0” and 175 pounds, he’s probably not going to out jump or out run many defensive backs.

However, he doesn’t need to out run or out jump the opponent in order to be productive. His route running skills are comparable to VandeBerg’s, and he has great hands. Nathan Stanley has shown nice accuracy in the short passing game. All Cooper will have to do is find the hole in the defense, get himself open, and catch the football.

One of the 10 true freshmen to see playing time last season was Ihmir Smith-Marsette. He is one of the few true freshman who was able to make an impact on a weekly basis. Ihmir stands at 6’2” and 175 pounds.

During his freshman campaign, Smith-Marsette went for 187 yards off of 18 catches. He caught two touchdowns, one of them coming in one of the most high pressured moments of the season; Smith-Marsette hauled in the game winning touchdown in overtime versus in-state rival Iowa State in Ames. Talk about a clutch play from a true freshman.

The big play ability was shown from time to time with Smith-Marsette last season. He had a big catch during the Penn State thriller. He also displayed his value on special teams with an elusive kick return during the Nebraska beat down. Although that play was called back due to a penalty.

He has the speed to blow by defensive backs and vertical to go up and get it. His hands could be a bit more dependable, but that is what the off-season is for. We should see the improved chemistry between Smith-Marsette and Stanley in full display next season, and if his first season is a sign of the future then we should expect him to be one of the best wide receivers on Iowa’s roster.

One of the biggest cons of having a young squad of receivers is that there is no true veteran to guide them. These three players are on this list because of their upside. However, I wouldn’t be mad if I had to eat my words from this article. I’d be thrilled to see another player not mentioned step up. This is a position that needs it.

The pros of having a younger group of players is that they can pave their own path. They will be able to leave a mark on the program together. We saw how McNutt and DJK were able to produce, and I could something similar happening with these young playmakers.

Losing VandeBerg may not dent the stat-sheet, but not having a reliable veteran leader out there will be a challenge. There will be a learning curve with these young guys.

We also have to remember, Iowa’s new(-ish) receiving coach Kelton Copeland is still building relationships with these players. One more year of working and mastering their craft in the off-season should equal improved numbers this next season.

Do I see our passing game taking a step back? Absolutely not. Yes, the challenges will be there, but we must remember that throwing the ball hasn’t been our identity. With this offense they just need to catch the ball when it is thrown to them, and anything on top of that is a bonus.