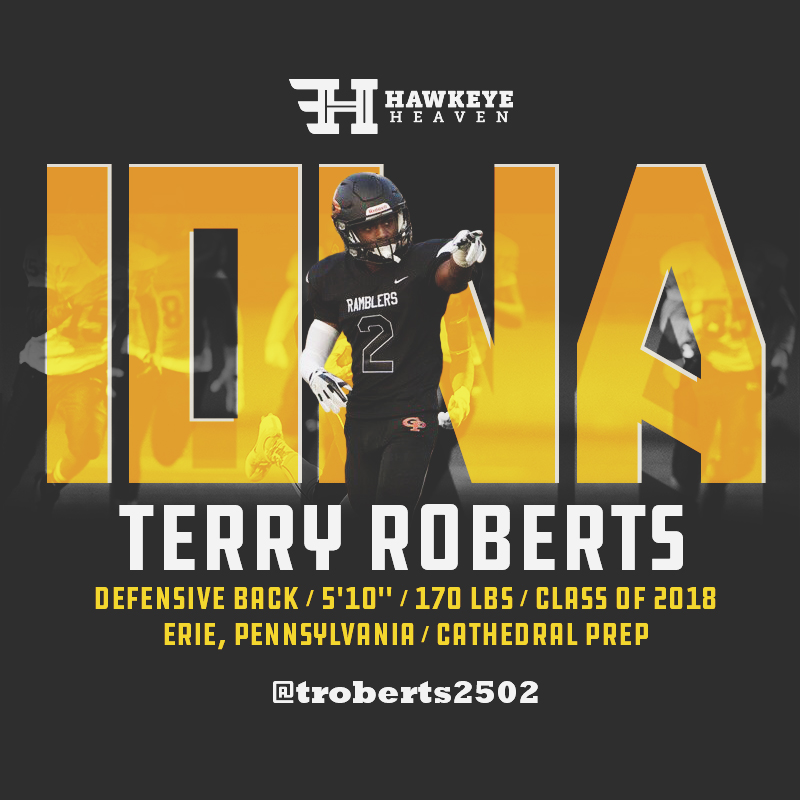 Iowa City, Iowa – Our team at Hawkeye Heaven is writing a series of articles where we highlight each of the 22 commitments Iowa received in the 2018 class. We’ll share each recruit’s highlights, and do our best to mention what jumps out at us about each player on tape. Then we will predict what kind of an impact we think they will make in a Hawkeye uniform. Up next is the defensive back Terry Roberts!

Terry Roberts is a 5’10, 170 pound defensive back from Erie, Pennsylvania. Eris has been a hotbed for Hawkeye recruiting in the past and this year is no different. I’m guessing you recall the name Bob Sanders, Ed Hinkel, and Jovon Johnson. All of these former Hawkeyes were from Erie, Pennsylvania and both Johnson and Sanders played a crucial role early on in Terry’s life.

Jovon Johnson recently had this to say about the future Hawkeye:

I’m hearing rumors that Coach Parker said Iowa plans to have 1-2 true freshman cornerbacks in 2018! Well let me introduce you all to Terry Roberts from Jovon Johnson’s School of DBs! Don’t sleep he’s hungry! @RobHoweHN @HawkeyeFootball give him some praise too! He gone shock yall pic.twitter.com/UXxO…

Robert’s offer list may have been short with just Iowa, Duquesne and Syracuse, but Hawkeye fans know better than to let that fool us. It looks like this kid has a great work ethic, he’s already training with some of the best, and he’s coming in with a chip on his shoulder ready to prove people wrong. That’s also something he has in common with Hinkel, Sanders, and Johnson. There must be something in the water in Erie.

For anyone who didn't know, no you do!! Very excited and blessed #Deuce #Swarm18 pic.twitter.com/n0Kx…

The first thing I noticed when watching Robert’s highlights is his ability to close, and close quickly. Early on in his film you’ll see offenses trying to throw a quick out or a bubble screen and Roberts was there in the blink of an eye to shut it down.  His pick six early in his highlight shows just how quick he is.

It also appears that Roberts has great hands. You can see that in both his film and the short video Jovon Johnson posted of him doing a drill that combines footwork hand eye coordination. His first step and ability to jam receivers at the line when in press coverage is solid as well. There are a few plays Roberts is caught peaking into the backfield, but his quickness saves him against high school athletes. He’ll pay for those mistakes at the collegiate level so that’s definitely something he’ll have to work on moving forward. Trust your experience, keep your eyes on the thighs and get a good jam. Don’t get greedy.

His highlights are impressive, but his ability and explosiveness on special teams also got me amped up. Far too many athletes these days think it’s embarrassing to be listed on the special teams depth chart, but it’s easy to see Terry relishes these opportunities and takes full advantage. His ability as a return man could get him on the field earlier after he arrives in Iowa City.

Typically guys who come into the Iowa system with a chip on their shoulder often leave the program with an opportunity to be drafted. That seems to be the type of kid the Hawkeyes are getting here with Roberts. He will need to come in ready to buy into Coach Doyle’s program. There’s no reason he isn’t ready to do that. He has room to improve in the weight room, but that’s perfectly normal for an incoming recruit. He sits at 180 lbs now so he really doesn’t have that far to go. The legends from Erie, Pennsylvania hold a special place in the hearts of Hawkeye fans. Let us all hope that Terry Roberts is the next name mentioned among the Erie-to-Iowa City greats.

Kirk Ferentz Is Certain The Wave Will Last Forever