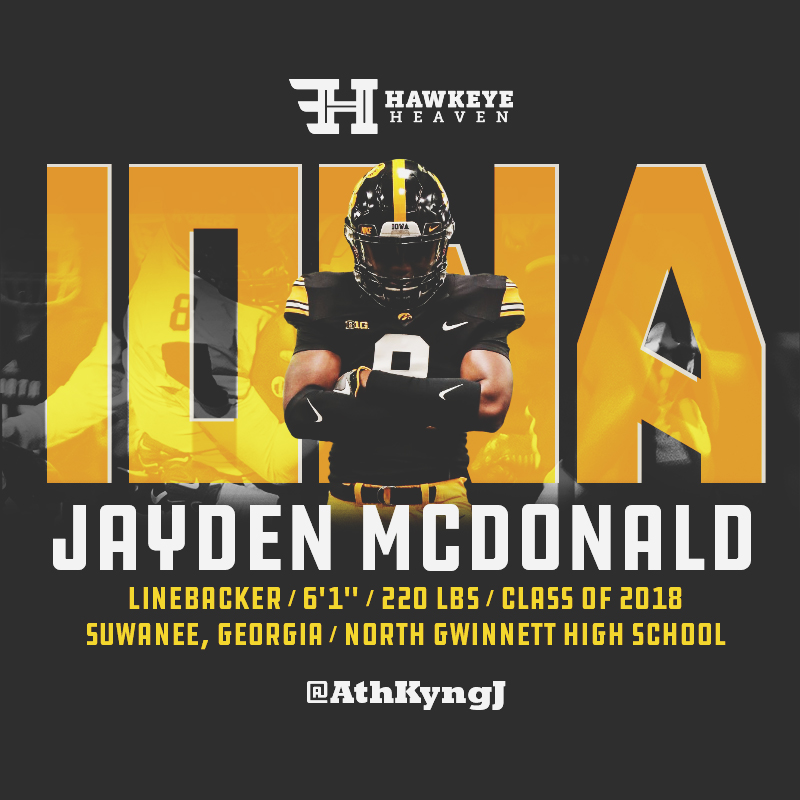 Iowa City, Iowa – Our team at Hawkeye Heaven is writing a series of articles where we highlight each of the 22 commitments Iowa received in the 2018 class. We’ll share each recruit’s highlights, and do our best to mention what jumps out at us about each player on tape. Then we will predict what kind of an impact we think they will make in a Hawkeye uniform. Next up is linebacker Jayden McDonald!

Jayden McDonald is a 6-1 220 lb. outside linebacker recruit out of North Gwinnett High School in Suwanee, Georgia. He’s a young man who built up an impressive list of offers during his high school career. Jayden held offers from Kansas State, Ole Miss, Purdue and Rutgers to name a few. He committed to playing for the Hawkeyes on February 5th and signed his letter of intent two days later.

McDonald is listed as a 3 star recruit on Rivals and was previously committed to playing for Rutgers. He opened his recruiting back up, and it paid off for him. Once he decommitted additional offers came flooding in. In the end, it boiled down to Iowa, Ole Miss and Kansas State. When signing day rolled around he surprised a lot of people by deciding to head up north to play for Coach Ferentz and the Hawkeyes instead of staying in the south and attending Ole Miss.

Jayden was impressive defensively his senior season of high school. He finished the year with 10 sacks, 76 tackles, 44 of which were solo tackles, and 4 interceptions. By the end of his senior season he was ranked as the #2 linebacker recruit in the state of Georgia.

My first takeaway after watching McDonald on tape is his quickness. Linebackers aren’t usually the fastest guys in the world, but having a good first step is crucial. Jayden brings both to the table. His ability to plug the run and get back into pass coverage is impressive when watching his film. There are multiple plays on film where he uses his speed to get into the flats to break up passes. He has a knack for bringing the heat on outside runs as well. His ability to hide the blitz, and time it perfectly was shown on film. The way he uses his hands also jumps out at me. He’s constantly trying to strip the ball from running backs and wide receivers in order to make a big play even bigger. This type of effort is what creates game changing plays, and makes game changing players.

The easiest comparison to make here is Christian Kirksey and/or Anthony Hitchens. He’s sort of a Kirksey/Hitchens hybrid. He’s bigger than Kirksey was coming into Iowa City, and he looks a little quicker than Hitchens. Considering both Hitchens and Kirksey are playing in the NFL right now if McDonald can become a hybrid of the two it’s safe to say he has one hell of a future in front of him.

Jayden McDonald’s future in the black and gold is as bright as any recruit we’ve covered thus far. I think the Hawks will keep him in the outside linebacker position because of his quickness. He’ll need to come in and make plays on special teams early in his career to see the field, but by his sophomore season I fully expect him to be getting reps at the outside linebacker position. Jayden has the ability to be a crucial centerpiece to this defense in the years to come.

Welcome to the Hawkeye family Jayden!