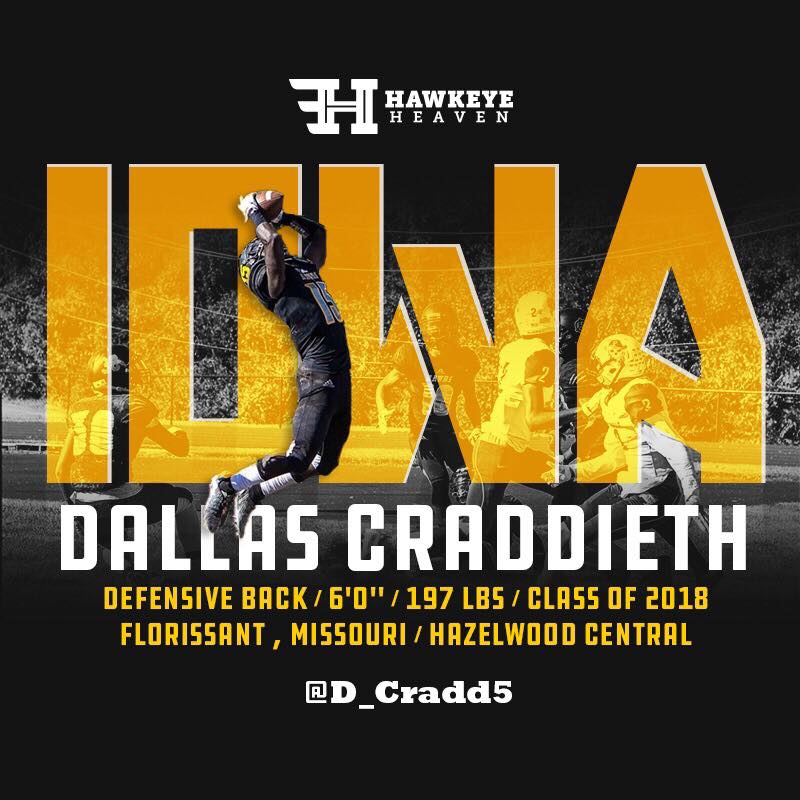 Ankeny, Iowa – Now that the 2018 college football signing day is officially in the past our team at Hawkeye Heaven is going to put together a series of articles where we highlight each of the 22 commitments Iowa received. We’ll share each recruit’s highlights, and do our best to mention what jumps out to us about each player on tape. Then we will predict what kind of an impact we think they will make in a Hawkeye uniform. Next up is 4 star DB Dallas Craddieth.

Craddieth currently stands at 6’0″ and weighs 197 lbs. He projects as a DB for the Hawks. Whether that role comes at safety or cornerback is yet to be determined. Craddieth played both SS and WR for his Hazelwood Central high school team.

Craddieth joins the Hawks as the 7th best prospect in the state of Missouri and the 27th best safety in the entire country. He chose the Hawks over Wisconsin, Illinois, Indiana and several others. The Hawks had been after Craddieth for quite some time, they were his 2nd overall offer going back to 2016.

I had a chance to chat briefly with Craddieth earlier this week.

HawkHeaven: Some Hawkeye fans and beat writers have made comparisons between you and Josh Jackson. Which is obviously reason for them to be very excited. What similarities do you see between yourself and Josh?

Craddieth: I see a lot of similarities between Josh Jackson and myself. We’re both ball hawks and have a good feel for the ball. And we both will have worn #15.

Most Hawk fans want to know about the football player coming into the program, but before we dive too far into the details of the young man’s skills on the field it is worth taking a second to talk about the man off the field first. While researching Craddieth I was skimming through his Twitter account and noticed he has a friendship with a teammate who has down syndrome. While speaking with Dallas this week I brought it up.

HawkHeaven: I’ve noticed in a few of your Twitter pictures that you seem to have a close friendship with a teammate with down syndrome. Can you tell me how that friendship got started and what it means to you?

Craddieth: His name is DJ and we’re pretty close. I met him at the beginning of the season when our coach told us he decided to join the team. DJ and I ended up having the same sponsored teacher during the season so I was able to walk him down to our sponsor and over time we just got really close. Having talks with DJ I just always made sure he was having a good day and not giving his teacher any trouble. DJ would always give me hugs before games and I still talk to him and go dap him up whenever I see him around school.

After spending some time watching Craddieth’s film there’s a few takeaways worth noting. First and foremost, the growth you can see when watching his Junior and Senior season highlights is tremendous. He really has a knack for finding the ball and putting himself in a position to make a play.

Hawk fans always like comparisons so we’ll give you a comparison. Watch the play at the 35 second mark in the video. Craddieth diagnoses the play and comes downhill in a hurry. He packs a punch when attacking the ball carrier. This type of awareness and explosion will remind Hawk fans of the great Bobby Sanders.

His senior season stat line speaks for itself. Craddieth finished the season with 42 solo tackles, 66 total tackles, 5 INT’s, 1 forced fumble, 1 sack and 3 tackles for loss. His ability to close on the ball carrier and make it seem as if the field is only 20 yards wide is impressive. When opponents would try to beat his Hazelwood team on the outside Craddieth would quickly show up in the picture and develop the knockout blow.

Keep in mind that we live in the day and age where the RPO, or run pass option, is an often utilized offensive attack. Defensively teams can struggle against a well executed RPO offense, but Craddieth’s skill set will really excel against these types of offenses. He plays fundamentally sound football, knows the inside out rules for his position, and then makes a play on the ball when it comes to him.

The future for Craddieth is strong with this Iowa program. He comes in with solid size and weight already. It shouldn’t take long for Coach Doyle to turn Dallas into a 215 pound missile being launched out of the Iowa secondary.

It may be worth mentioning that Craddieth has a lot of skill on the offensive side of the ball as well. He’ll likely be given an opportunity on special teams as a kickoff returner and/or punt returner. That may be one way that he can get himself on the field early.

HawkHeaven: You are a part of what many people are claiming is one of the best recruiting classes in Iowa football history. Eyes on the prize, what’s the ultimate goal for you and this class moving forward?

DC: Our goal is to win the Big 10 and to win a National Championship. We need to keep bringing in good guys so that we can stay at the top of the conference and compete and do well in big games year in and year out.

Perhaps the best compliment you can receive from a Hawkeye fan is a comparison to Bob Sanders. Those are big shoes to fill, but Dallas has a bright future in front of him and a ton of potential.

Welcome to the Hawkeye family Dallas!