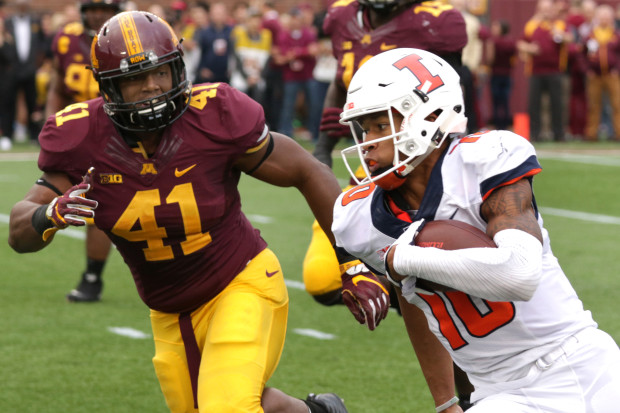 Iowa City, IA – The first part of this series focused on the top defensive backs that are returning to the Big Ten next football season. With Part 2 we’re going to shift our focus to the enforcers who protect the middle of the field…linebackers. The Big Ten, and Iowa, will be losing some special players at this position to graduation and NFL careers, but some young guns will be roaming between the hash marks next season.

Thomas Barber/LB/Minnesota – In my opinion, the best returning linebacker next season is Thomas Barber. The Golden Gophers struggled to win games in 2017 mostly because of their offensive issues. Their defense was fairly stout. Barber did a little bit of everything last year as he had 115 tackles, 1.5 sacks, 10.5 tackles for loss, one interception, three passes defended and three forced fumbles. Minnesota may struggle next season again, but it won’t be because of Barber.

Joe Bachie/LB/Michigan St. – Do you want a man who does it all defensively? Of course you do. Bachie’s numbers may not pop off of the stat sheet at the end of every game, but the stats accumulate by the end of the season. Bachie totaled 100 tackles, 2.5 sacks, 7.5 tackles for loss, three interceptions, two forced fumbles and had two passes defended in 2017. Bachie still has two more years left as a Spartan. Look for them to contend in the Big Ten East again next year.

Devin Bush/LB/Michigan – Rounding out the linebacking core is the first Wolverine in this series, Devin Bush. Year-in and year-out Michigan has a solid defense. The Wolverines lost some good defensive talent to the NFL Draft in 2017, but Bush picked up the slack last season. Bush did a lot of the hard hitting in the backfield last year as he was able to rack up 10.5 tackles for loss and five sacks. He also played pretty well in coverage as he broke up seven passes. The Wolverine team as a whole still can’t decide if they want to be good or not, but there is no doubting Bush’s abilities.

Other linebackers to miss the cut: 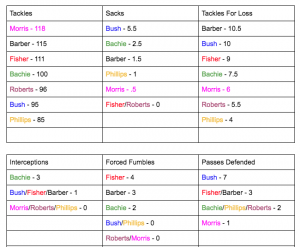