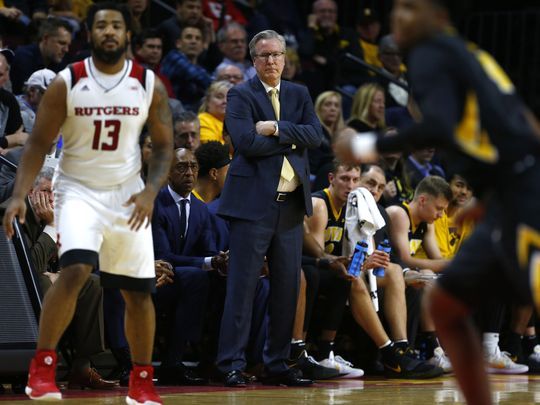 IOWA CITY, Iowa – Last week, Iowa managed to erase a 20-point deficit to beat Illinois in Champaign. It was just the third time in program history the Hawkeyes had won a game in which they trailed by 20 or more.

The Hawkeyes had a shot to do it twice in as many games, but the task was too tall on Wednesday.

Rutgers used a strong defensive outing to record its second conference win of the season, beating Iowa 80-64. The Scarlet Knights kept the Hawkeyes out of sync all night.

Really, it was all night.

Iowa Head Coach Fran McCaffery made multiple line changes in search of energy, but he never found it. The Hawkeyes shot just 39.3 percent from the field.

“Our shot selection wasn’t good,” McCaffery said. “You gotta drive the ball, you gotta get the ball inside. We settled, I thought.”

Iowa never found a rhythm, adding to a theme that is becoming all too consistent for the Hawkeyes. Aside from a short spurt from Jordan Bohannon where the sophomore hit three straight threes and went on a 9-0 run, the Hawkeyes lacked energy and ball movement.

“We tried to go a little too much one-on-one,” McCaffery said. “That’s not who we are, we have to get the ball moving.”

The defense struggled mightily yet again as well.

Last Thursday, Illinois scored 90 points in regulation despite being one of the worst offensive teams in the Big Ten. The Illini share that quality with the Scarlet Knights, who finished with 80.

The Knights were 7-of-16 from behind the three-point line, and used sharp shooting from Geo Baker (3-of-5 3FG) and Issa Thiam (4-of-6 3FG) in the first half to build a lead that spanned as many as 23 points.

In the second half, leading-scorer Corey Saunders turned his game up. Saunders led the Knights with 18 points and added eight assists.

But like I said in my recap last week, this group of Hawkeyes is never done fighting.

The second half rolled along like a slow moving funeral procession. Neither team seemed to have much energy as the difference was close to 20 for most of the half.

Late in the game, Bohannon and Nicholas Baer hit a hot streak, knocking down a pair of threes each to somehow pull the Hawkeyes to within 10 points of the lead with two minutes to play.

Somehow, in one of the darkest moments this season has seen, the Hawkeyes found something to fight for. The late jolt of energy was too little too late, but it showed the true colors of this group of underdogs.

Bohannon led the charge, netting 23 points. He has now hit five three pointers in each of the Iowa’s last three games.

Baer finished with 11 points after the late surge, and Cook recorded another double-double with 10 points and 10 rebounds.

Saturday’s game is the Forever 40 Memorial Game to honor the late Chris Street. Fans are encouraged to were white to celebrate the legacy Street left at Iowa, even after his untimely death 25 years ago. Tipoff is set for 11:00am CST on ESPN.

“Obviously Purdue is playing as well as anyone in country right now,” McCaffery said. “We’re expecting a great crowd to honor one of the all-time great Hawks…We want to honor Chris’s memory by having a good performance.”