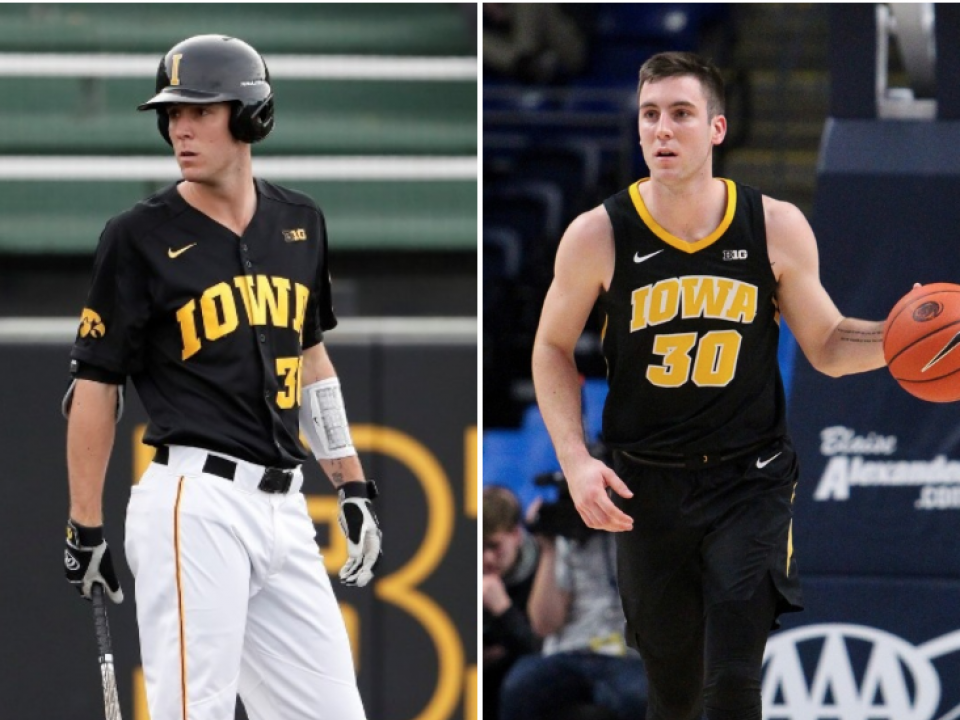 When Connor McCaffery the point guard becomes Connor McCaffery the southpaw outfielder sometime this spring, he’ll join a number of well-known Hawkeyes who have made an impact in multiple sports. After setbacks a year ago to both illness and injury, Connor has enjoyed a productive redshirt freshman season on the men’s basketball team averaging about 5 points and over 3 assists per game.

He also seems to know how to find the right Iowa shooter when inbounding last-second passes with games on the line.

Connor is a very promising player on Coach Rick Heller’s baseball Hawks and was named to baseball’s National Pre-Draft Top Prospect List in 2017, although he would probably be the first to say he hopes his baseball playing days are delayed by a lengthy Iowa run into the NCAA hoops tourney next month.

Dual-sporters seem to bring an extra competitive gene simply from being a part of two programs, which probably adds inspiration and motivation to their teammates in either sport. Taking part in multiple practices while juggling Big Ten travel and classes doesn’t allow much free time, so extra kudos to Connor regarding his being an excellent student. Although it begs the question, when does he sleep?

“Double duty” athletes used to be more common, and not just at Iowa. Part of this was that when enrollments were smaller, there were more opportunities for all-around athletes on limited team rosters at each school. And part of it is today’s specialization and the fact that most athletes practice their preferred sport year-round.

I think that most fans, teammates and coaches truly respect and appreciate the extra dimension of dual-sport athletes. I remember Lon Olejniczak, a punter/tight end on Iowa’s football team from 1979 through 1983, who also excelled on Coach Duane Banks’ baseball team. One afternoon following a heated spring football drill in April 1980, Coach Hayden Fry instructed all of his sweaty players to swing by the ball diamond and encourage the day’s starting Iowa pitcher—their dual-sport teammate Lon. When the gridders noisily and colorfully arrived somewhere around the fifth inning, it doubled the size of the crowd and it also did something else. The opposing team looked totally intimidated, and Olejniczak probably added five more miles per hour to his fastball thanks to seeing his fully-padded football brothers in the stands. Obviously, Hayden Fry respected Duane Banks and the baseball team to show this kind of support.

As a sports editor of the Daily Iowan in the mid-1970s, I remember observing how two other coaches—football’s Bob Commings and wrestling’s Dan Gable—accommodated talented football lineman Doug Benschoter in transitioning to the latter’s squad late in the season. In the early 1970s, Fred Mims—who retired as associate athletics director in 2015—played both basketball and baseball and was part of Iowa’s only College World Series team in 1972. I remember Iowa even having a dual-sport coach in Dick Schultz, head baseball coach from 1963 to 1970 and men’s basketball coach from 1970 to 1974.

Although I may have missed a two-sporter’s name or two, I know these Hawkeyes each played varsity football and basketball at least one season: Fred Riddle, Jon Beutjer, Nate Washington, Erwin Prasse (a Nile Kinnick teammate), Tom Grogan and Matt Szykowny.

My personal reason for respecting dual-sport athletes so much is because of my father, the late Dr. Justin Tolan of Pocahontas, Iowa. Dad earned a freshman numeral at Iowa in 1937 and also played basketball in the 1937-1938 season before giving up athletics to concentrate on academics. He’s the small guy pictured with the basketball freshmen in the 1938 Hawkeye yearbook in between the beefier Bruno Andruska and Mike Enich, two Ironmen football players of much renown.

Which brings me to close with the standard-bearing multi-sport athlete of all time at Iowa—and a three-sport athlete at that! Of course, we all know Nile Kinnick played football, but he also played two years of basketball and one year of baseball for the Hawkeyes. He dropped the latter two sports to concentrate on academics, but historic accounts suggest he probably could have played professionally in any or all of the three.

Hawkeyes Stay on The Attack, Walk it Off at The “RAC”