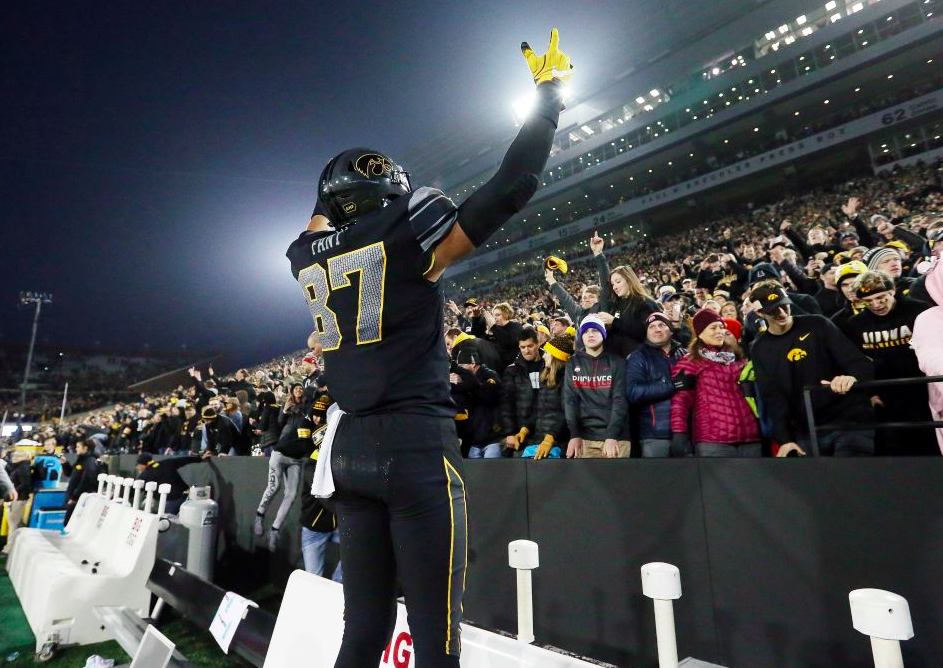 Iowa City, Iowa – As Hawkeye fans, we all know how we still utilize our running-backs, fullbacks, and tight-ends in the passing game. Running backs are rarely used, due to the team’s scheme or the lack of catching ability (THIS DOES NOT APPLY TO AKRUM WADLEY). Many, MANY, teams in college football have made the fullback position extinct. But, one of the most reliable positions in all of football, is the tight-end.

Iowa has received the name, ‘Tight-End U’, indicating that Kirk Ferentz breeds NFL ready tight-ends. With names such as Dallas Clark, Brandon Myers, Tony Moeaki, Scott Chandler, CJ Fiedorowicz, and George Kittle, there is proof in the pudding for how well the transition from college to the NFL is for Iowa tight-ends.

As Hawkeye football fans, we know we run a pro-style offense. Ground and pound, off-tackle, and play action is in our bloodline. But, we have some players that have allowed us to mix it up a bit. For example, Wadley isn’t your prototypical ‘ground and pound’ running back. His elusiveness is second to none, and the amount of defenders he has left grasping at thin air has surely made him a unique back in Iowa football history. Another one of those non-stereotypical Hawkeyes, is tight-end Noah Fant.

Noah Fant is a sophomore tight-end for the Hawkeyes out of Omaha, Nebraska. His presence is something opposing teams have to game plan for. Standing at 6’5” and 231 pounds, he is a physical force to be reckoned with. Now, those characteristics are pretty common for your prototypical tight-end.

What isn’t prototypical about Noah Fant? His agility and speed, as well as his reliable hands. With a 40 yard dash time at 4.64 before signing with Iowa, that speed has noticeably improved. And his hands? He has 28 receptions this year, which puts him 2nd for receiving on the team behind Nick Easley, who has 50 receptions.

The big stat that jumps out is his total yardage with those 28 receptions. He has 486 yards this season and averages 17.4 yards per reception. He is only 12 yards behind Easley with 22 less receptions than him.

That is what makes him an ‘un-prototypical’ tight-end. Usually, tight-ends are safety-valves for the QB to hit when under pressure, or their designed routes are short. Noah Fant? He is a downfield threat. When you combine that frame and speed together he is a match-up nightmare for any opposing secondary.

We should see tremendous growth from Fant for next year. He has another off-season to become more accustomed to Stanley, which is a scary thought considering those two had a great connection all season long.

The Hawkeye coaching staff is one of the best at developing players, and Fant is a prime example of that. His freshman year, he would fill in or be opposite of Kittle. He didn’t have quite the stature he has this year, nor the speed. Thanks to the incredible strength and conditioning program Iowa offers, there is no secret why he had a break-out year this season.

My prediction? I see him going for 650+ yards, and getting at least 40 receptions. I also see him breaking his own touchdown record, but still coming up short to Marvin McNutt.

All in all, this offense wouldn’t be the same without Fant. Who knew the tight-end position could be so fun to watch? Well, us fans over here at ‘Tight-End U’ knew it all along.