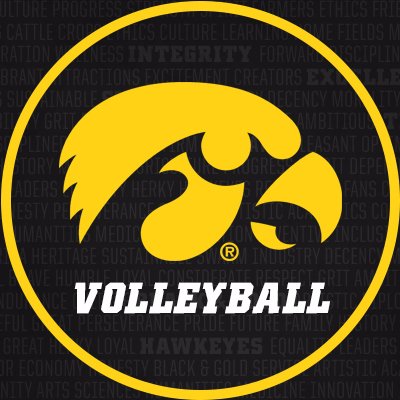 The University of Iowa volleyball team is scheduled to take on Big Ten Conference opponents, the Fighting Illini and the Wildcats in the second weekend of conference play, September 28th and 30th.

IOWA CITY, Iowa – There is no rest for the wicked as the University of Iowa volleyball team heads east to Illinois for another tough weekend of Big Ten Conference play.

“It’s fun being at home and having a home court advantage,” junior outside hitter Cali Hoyle said, “but being away and having people yelling at us really fires us up and gets us going.”

Iowa’s momentum sparked from a win over South Dakota State on Sept. 8. Since the 3-0 sweep of the Jackrabbits, the Hawkeyes went on a seven-game winning streak, defeating in-state rival Iowa State along the way.

“We’re capable of beating anyone. [Beating] Michigan State was a great way to start off,” senior libero Molly Kelly said. “We just have to keep the ball rolling with it.”

“We had great moments, but we weren’t consistent throughout and that’s what ended up costing us,” Kelly said.

Illinois comes into week two boasting a clean 13-0 record, moving up one spot in the rankings after week one.

“We’re going to use [the scouting report] a lot more against [Illinois and Northwestern],” sophomore setter Brie Orr said.

The Hawkeyes will do their best to prepare for their upcoming opponents thanks, in large part, to one theme that prevails regardless of outside circumstances, on and off the court.

Iowa stays disciplined when it comes to embodying its team motto: true mental toughness, better known to the volleyball team as, “Mission TMT.”

“The four tenants [of TMT] are treating others well, giving your very best, having a great attitude, and being unconditionally grateful regardless of your circumstances,” Kelly said. “The whole concept is that you can always get better in each of those four areas. It’s a day-in and day-out thing.”

Iowa’s defense will need to be geared up for an all-out battle with Illinois, who have recorded four front row players swinging .300 or above in kill percentage (346 kills on 734 attempts), whereas Northwestern only has one player hitting above a .300 so far this season.

Iowa remains unranked going into week two with a 9-4 record, making it clear that the black and gold have their work cut out for them.