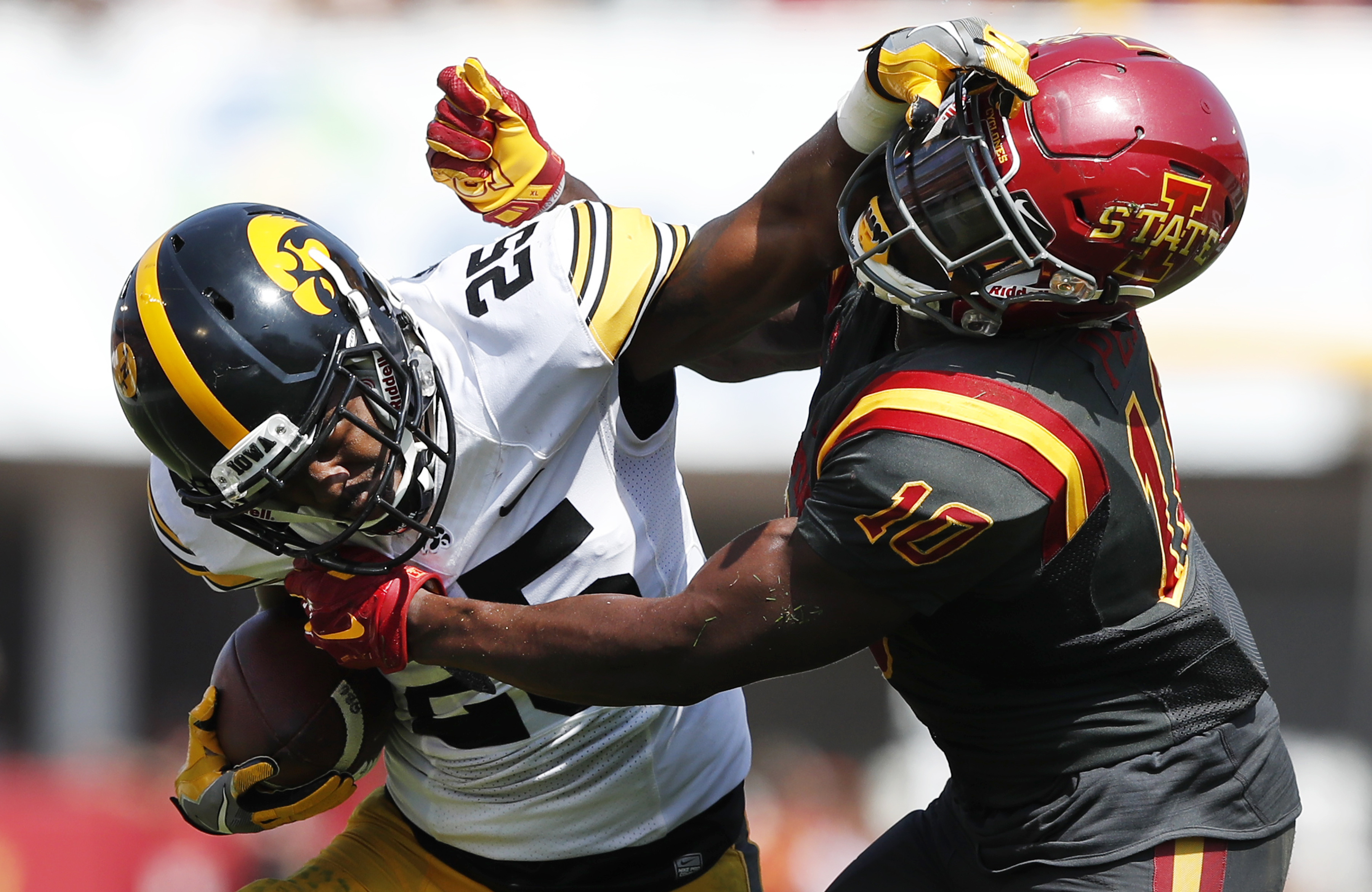 In a game that featured all of the emotions, Iowa gets the last laugh with a 44-41 overtime victory over Iowa State in the Iowa Corn Cy-Hawk Series rivalry game. Freshman receiver Ihmir Smith-Marsette caught the game winning touchdown in overtime.

“Every year, there’s a lot of talk, a lot of hype about this game,” said Iowa Head Coach Kirk Ferentz. “Today certainly lived up to the hype.”

What you got at Jack Trice Stadium on Saturday was two evenly matched teams that made plays when it mattered most. If it weren’t a rivalry game, I would day that it’s “one of those games where it’s unfortunate somebody has to lose.”

But, this is the most heated rivalry game in the state of Iowa, so somebody does have to lose. For the third straight year, that somebody was Iowa State.

The first half was a slugfest. Iowa State took the early 7-0 lead before the Iowa responded and took a 14-10 lead into halftime.

Out of halftime, Iowa scored again on its second drive to go up 21-10.

On each of Iowa State’s next three drives, they found the end zone. If there was momentum to be had, the Cyclones had all of it.

David Montgomery ran wild in the second half. His seven-yard run capped off the stretch of three straight touchdowns for the Cyclones that put Iowa State up 31-21. On the play, he ran through Iowa linebacker Josey Jewell right at the goal line.

Not to say things weren’t good already, but this was when things REALLY got good.

Iowa responded with a 92-yard drive that ended with a Smith-Marsette diving touchdown grab. Then on the ensuing drive, Park hit Hakeem Butler for a 74-yard touchdown pass to put Iowa State up 38-31. The final nail in the coffin… or so it seemed.

After trading punts, Iowa got the ball back at their own 11-yard line with 3:01 on the clock.

The Hawkeyes needed seven points to force overtime. Akrum Wadley was determined to get send us there.

Wadley caught a short pass from Nate Stanley and managed to break tackles and jump cut his way into the end zone for a 46-yard game-tying score.

Wadley joked after the game that he could tell his teammates were tired, so he ignored calls from the bench to get out of bounds. He felt he needed to score as soon as he could, and he did.

Iowa won the toss and chose to play defense first. The defense held Iowa State to a field goal, making it 41-38.

On offense, Stanley hit Smith-Marsette on an out route at the goal line to give Iowa the walk-off 44-41 win.

“We were down at the goal line, so it was a perfect play to run,” Smith-Marsette said. “We knew exactly what we wanted out of it, they played the perfect coverage to go against it, and we executed.”

Both defenses struggled to make plays today, because both offenses were getting into rhythms. Montgomery led the charge for the Cyclones. He finished with 112 yards on the ground with a touchdown, while adding 53 receiving yards.

Park was 25-for-46 for 347 yards and four touchdowns. His four touchdown passes were to Butler and Allen Lazard, who combined for 11 catches and 151 yards.

For Iowa, Stanley showed remarkable poise for a young quarterback making his first road start in a rivalry game. He was 27-for-41 on the game, throwing for 333 yards and five touchdowns.

“For him to play the way he played in this environment says a lot,” said Ferentz. “I had a flashback to C.J. Beathard two years ago making some really big plays for us here.”

Stanley still had points left on the table today. On at least four occasions, Iowa pass catchers got open deep, but Stanley over threw them. As Stanley gains more experience, he’ll start connecting on those throws. For now, in game two, he was a few yards off.

Wadley, again, proved to be the most electrifying player on the field. Wadley finished with 269 all-purpose yards – 127 rushing, 72 receiving, and 40 on kick returns. His final touchdown run that sent the game to overtime took the wind out of Jack Trice. Iowa State was on their way to victory, until Wadley happened.

Many media members are considering this game to be the best Cy-Hawk game ever. The game is drawing comparisons to 2011, when Iowa State beat Iowa by the ironic score of 44-41 in triple overtime.

Only time will tell if this game truly was the best yet, but it sure is going to be remembered for a while.

Who knows what next year will bring us, but we do know one thing for sure. IT’S A HAWKEYE STATE.

Get to know the Enemy -Week 2- Iowa