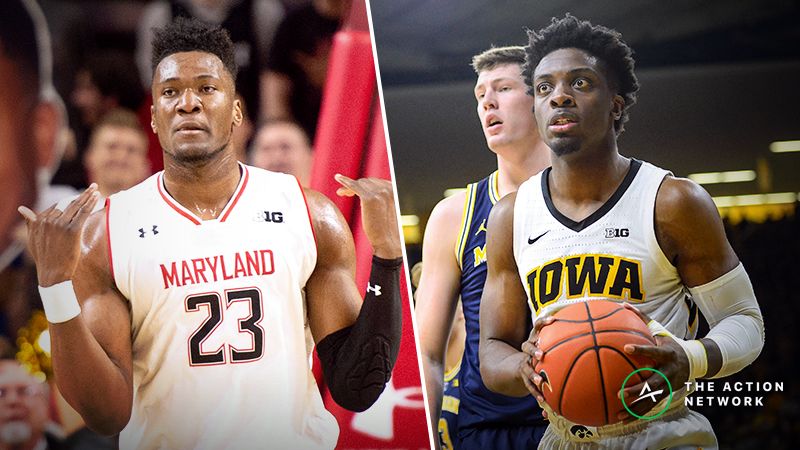 Late game heroics have not been lacking this season for the Hawkeyes. Iowa, winners of four straight, have won their last two games in dramatic fashion.  First it was Jordan Bohannon drilling a 26 footer to cap a near improbable comeback win vs. Northwestern. Then it was freshman Joe Wieskamp, going glass from the corner to stun Rutgers.  Tuesday the Iowa Hawkeyes (20-5, 9-5) have a chance to move into 4th place in the Big Ten, if they can take down the Maryland Terrapins (19-7, 10-5). A win would give the Hawks their fourth winning streak of at least five games this season.  It would also continue the team’s best start since the 1986-87 season, when the Hawks finished 30-5.

Beating the Terps will be a tall order, however.  Maryland comes into the game ranked 24th in the country and have one of the strongest freshmen classes in the league.  Maryland has a 5-4 record on the road this season, with all four losses coming in conference play to the upper echelon teams (Michigan, Michigan State, Wisconsin & Purdue).  The Terrapins will bring a stout defensive team into Carver Hawkeye Arena. Maryland is 5th in the league in defensive average, allowing only 64.6 points per game. They also boast one of the biggest front lines in the country, headlined by super soph Bruno Fernando. Fernando who stands 6-10 (7-2 with the flat top) is one of the most highly touted big men in the league, and a projected top ten pick in the upcoming NBA draft according to NBADraft.net.  He averages 14.5 points, 2 blocks and a team high 10.6 rebounds per game.  Brunno is joined up front by freshman Jalen Smith. Smith, who stands 6-10 as well, is also a projected first round pick.  He averages 11.8 points and 6.8 rebounds per contest. However, the engine that makes the Terps run, ironically, will be one of the smallest players on the floor. Anthony Cowan, who is listed at 6-0 tall, averages a team high 15.8 points and 4.5 assists per game, which place him 8th and 4th in league respectively. Cowan, was one of six players in double figures in last year’s 91-73 win over the Hawks.  The junior scored 15 points and handed out a game high 7 assists in the victory. Freshmen, Eric Ayala (8.8 ppg) and Aaron Wiggins (8.7 ppg) provide a nice pop from the outside for Maryland. Ayla leads the team shooting 44.8% from three and Wiggins knocks down 42.6% of his triples. Those percentages place them 3rd and 10th in the league respectively. Iowa’s Isaiah Moss (45.3%) and Joe Wieskamp (44.9%) are the top two percentage shooters in the conference.

The Hawks are 3-5 versus Maryland all time, 3-3 since the Terps joined the league in 2014. Tuesday’s game not only has big implications in future NCAA tournament seeding (according to Joel Lunardi both teams are currently projected as six-seeds).  The winning team would also be in the driver’s seat to grab a top four spot in the Big Ten standings, thus obtaining the coveted double-bye in the Big Ten Tournament.

Keys for the Hawks, like most games, will be at the defensive end.  Iowa is 11-0 this season when holding opponents under 70 points. Offensively, Maryland is one of the only teams in the league that can match-up with the Hawkeyes in the paint.  Iowa will still need to establish Tyler Cook and Luka Garza, but will really need their hot three point shooting to continue. Iowa is 33 of 77 (45.2%) from behind the arc during their current four game winning streak. Lastly, according to 247Sports, Maryland is 0-19 on the road versus ranked opponents under Mark Turgeon.  The Hawkeyes are currently ranked #21