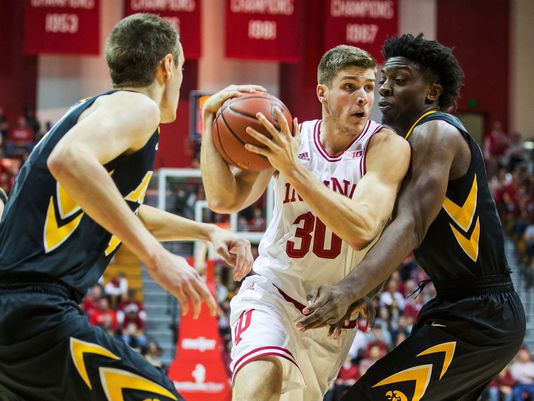 The Hawkeyes have had a tough time with Indiana recently, especially in Bloomington. Iowa has dropped 8 of their last 10 match-ups with the Hoosiers, including their last three at Assembly Hall. Iowa’s last win at Indiana came four years ago on March 3, 2015 when Aaron White scored 21 points to lead the Hawks to a 77-63 victory.

Indiana, losers of seven straight before their win at East Lansing, has been a much better team at home this season than on the road. The Hoosiers are 10-2 at Assembly Hall including wins over #10 Marquette and #16 Louisville.  However, after a 10-0 start to their home season, they have dropped their last two Big Ten home games to Nebraska and Michigan.

Iowa has had some well documented struggles on the road in conference play over the past few seasons. The Hawkeyes started this conference season 0-2 on the road in Big Ten play with a pair of blowout losses at Michigan State and Purdue before winning two straight away from Carver at Northwestern and Penn State. In their last road trip the Hawks fell 92-87 to the Golden Gophers in Minneapolis.  The 92 points given up were the most this season by Iowa.

The Hoosiers are led by Freshman standout Romeo Langford. The 6-6 guard, coming off a 19 point 4 assist performance vs. MSU, is the highest scoring freshman in the league netting 17.4 ppg. Langford is an electric player with highlight reel athletic ability. He does most of his damage off the dribble attacking the rim to score, or draw and distribute. Langford, despite hitting the go ahead three at MSU, has struggled from behind the arc this season. The young Phenom has made only 24.1% (20-83) of his triples this season.

Indiana’s second leading scorer, Juwan Morgan (15.9 ppg), left the Michigan State game after re-aggravating a previously operated on shoulder.  According to the IndyStar, Morgan did return to limited practice on Monday, and is “headed in the right direction,” for the game on Thursday vs. the Hawkeyes.  If the senior plays, he has the ability to fill up the score sheet. He has gone over 30 points twice this season, including a career high 35 points in a win over in-state rival Butler on December 15. Morgan (6-8, 231) is a big body inside, where he does most of his work. However, he has improved his shooting from the outside connecting on a career best 37.7% (20-53) of his threes this season.

Indiana does a majority of their scoring inside the arc; 76% of their points come on two point field goals and free throws, compared to 69% for the Hawkeyes.  The Hoosiers are 13th in the league in three pointers attempted with 396 and 11th in the league in three point percentage (32.8%). Although the three point shot isn’t a huge part of Indiana’s offense, it does seem to be the key to the Hoosiers wins.  In their thirteen wins this season, Indiana has connected on 37.2% of their three point attempts making 6.6 a contest, but in their nine losses they have only shot the three at a 26.7% clip making only 4.8 of their attempts.

In order to pull off this road victory, the Hawks will need to be stout on the interior defensively, keep Indiana off the offensive glass, limit dribble penetration by Langford and keep the Hoosiers under six made three point field goals.

Hawkeyes in the Super Bowl