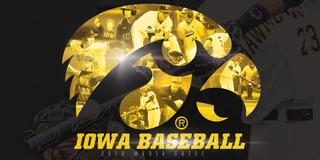 Iowa could not complete the weekend sweep of UAB as they fell 4-0. This was Iowa’s first time being shut out this season. Kyle Crowl and Tyler Cropley each had two hits to combine for four of Iowa’s five hits as a team. The other hit was by Lorenzo Elion. Robert Neustrom went 0-4 to see his 9 game hitting streak come to an end.

Cole McDonald pitched well for the second week in a row after a rough opening start. He went 5 innings allowing just 1 run on 5 hits while striking out 4. He was relieved by Kyle Shimp, who gave up 3 runs while getting just one out in the 6th inning. Grant Leonard, Shane Ritter, and Jack Dreyer combined to pitch the last 2 and 2/3 innings without allowing any runs.

The Hawkeyes fall to 8-2, and resume play with a Tuesday home game against Maryville at 4:05, before traveling to Las Vegas for a three game weekend series with UNLV.