Davenport, Iowa – We recently had a chance to speak with actor, comedian, and longtime Hawkeye fan Tom Arnold for a quick Q + A. Tom is from Ottumwa, Iowa and was a student at the University of Iowa from 1981-1983. He has always been an avid Hawkeye supporter.

Tom is best known for his role in the 1993 hit movie True Lies where he starred on the big screen with Arnold Schwarzenegger and Jamie Lee Curtis. He was famously married to Roseanne Barr, star of the ABC series Roseanne, for four years, and he was also one of the hosts of The Best Damn Sports Show Period from 2001 to 2005. In recent years, Tom has made appearances in shows like Workaholics, Trailer Park Boys, and even NCIS:New Orleans.

HH: You were enrolled at Iowa in the 1980’s, where were a few of your late night hang outs?

HH: You’ve been quoted as saying you’ll be buried in a Hawkeye locker. Has that changed or is it as true today as it was the day you said it?

Tom: Well at the time they were selling them for a very reasonable price and they looked nice so of course I would. It’s one less thing my family will have to worry about, and one more thing for my friends to smile about on what might be kind of a sad day.

HH: Couple of All-Time questions for ya… 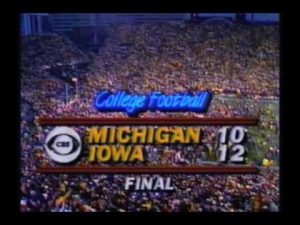 Greatest Hawkeye game you ever attended?

HH: Last week was the 25th anniversary of the death of Chris Street. Mind sharing what you remember about that fateful January evening?

Tom: I had just returned home from shooting the Roseanne show and my Iowa buddy Mo called and told me there’d been an accident. I was shocked. We’d just had a discussion about Chris and Jess Settles, and how amazingly talented a ballplayer both were and also how unusually handsome Chris was especially for an Iowa guy ;). Shockingly sad! I’ve thought about his family in Indianola a lot over the years. 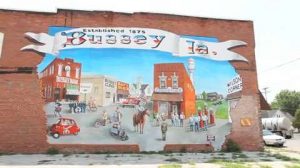 HH: Two of the four owner’s of Hawkeye Heaven grew up in their early days in a small town named Bussey, Iowa. Having grown up in Ottumwa yourself, we were wondering if you ever visited Bussey? If so, any memories?

Tom: I know Bussey well. Got arrested in Bussey. My buddy Mo makes an appearance here too. We won a slow pitch softball tournament there. Got over served at the bar afterwards and got into it with a 2nd basemen. We went outside to settle up and the guy was a wrestler and got under me and flipped me over and my head hit the parking lot pavement. Woke up in the ambulance and my four drunk buddies were in there too. Dang doctor let them go into the emergency room and watched him shave my head and give me 40 stitches. Since I wasn’t real smart back then I went back to the bar to finish the fight. Cops came to basically save what was left of me. Took us to jail and then drove us to the edge of town and asked that we never return to Bussey, Iowa. If I remember right the brothers I fought last names’ were Fugate. They were pretty tough back in the day!

HH: If you could square off against another famous Iowa alum in a charity boxing match, who’s your opponent?

Tom: If it was for charity I’d square off with any of them because it’s for charity and you use those big gloves. Ashton is younger and in better shape than me, but I’d go against him to help benefit my Children’s Heart Camp in a second. I know a bunch of Iowa guys, mostly younger. Set them up! I’d love to pound the crap out of Rep. Steven King (@SteveKingIA)  because he’s embarrassing and such an overt racist moron. That would make for a good day.

HH: As an avid Hawkeye fan, do you you hate the Cyclones? Or are they just a mosquito that’s easily swatted away?

Hawkeye Heaven would like to thank Tom for giving us a few minutes of his time. Be sure to follow Tom on Twitter @TomArnold and swing on by Tom’s website for more information about Camp del Corazon, a free summer camp for children with heart disease. Click HERE to check it out.

Hawks Take on Gophers at Home