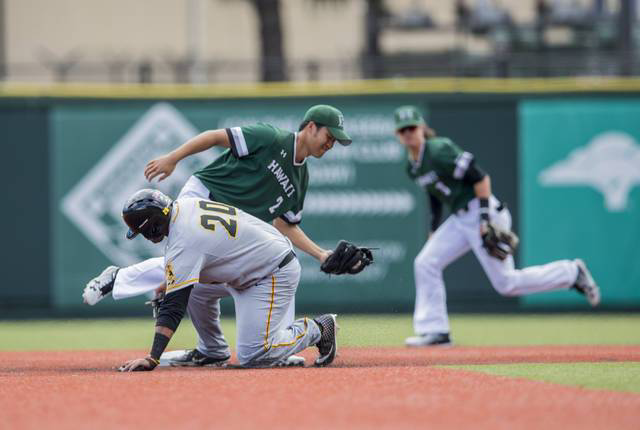 The Hawkeyes traveled to Hawaii to take on the Rainbow Warriors in a 4 game series this past weekend. Hawaii plays in the Big West, one of college baseballs more well-respected conferences. Still, the Hawkeyes are the better team on paper and realistically had a chance to take all four games, and anything less than 3-1 would’ve been a disappointment. So, lets take a look at how the Hawkeyes performed on the diamond.

Iowa got off to a slow start on Friday night, only managing four hits in the ball game, not managing their first until the 6th inning. However, this doesn’t mean that the Hawkeyes weren’t getting men on base. Jeremy walked five Iowa hitters, and plunked two for free bases. However, Iowa could muster nothing from these free passes. Wu-Yelland ended his day with five strikeouts and no hits allowed. Cole McDonald struggled for his second straight game, a surprise for many. Cole was projected to be the Hawkeyes best and most consistent starter. He has not done so so far. However, the season is still very young. McDonald gave up 7 hits in 3.2 innings pitched, which resulted in five earned runs against Cole. Most of the damage came in the third inning when Hawaii left fielder Scott Scotty hit a bases-clearing triple. Iowa never managed any of these clutch hits, going 0-12 with runners in scoring position. Second Basemen Mitchell Boe tied an Iowa record with four walks in Friday’s game.

The offense bounced back in a big way in game one of the Saturday doubleheader, notching 10 runs on 14 hits. The Hawkeyes got multi-hit performances from five different hitters. Starter Jack Dreyer only pitched two innings, giving up two runs. He was relieved by Freshman Duncan Davitt, who was roughed up bad. Duncan only recorded one out but gave up 5 runs, three of which were earned. He also threw two wild pitches and gave two bases on balls. However, winning pitcher Trace Hoffman calmed the storm. Hoffman threw 3.2 innings and didn’t give up any free passes, and was a big piece to the Hawkeye victory. Iowa had big 3rd, 4th, and 7th innings notching three, four, and three runs in each. First basemen Izaya Fullard hit a long double down the right field line to bring the Hawkeyes within one before Ben Norman tied the game with an RBI groundout. The Hawkeyes took the lead in the seventh with a string of hits from Austin Martin, Zeb Adreon, and Justin Jenkins. Iowa showed toughness battling back from deficits two separate times to notch the victory.

Hawaii scored the first runs of the game for the third straight time against Hawkeyes pitching, but that didn’t face Heller and the rest of the Hawkeyes. Shortstop Tanner Wetrich hit a grand slam, the first of his career,  in the top of the third to give the Hawks a 4-2 lead. The pitching staff never looked back. Iowa starter Cam Baumann struggled with his control all day, giving away seven bases on balls in his four innings tossed. He handed the ball over to Drew Irvine who pitched two scoreless innings. Four Hawkeye reliever bridged the way to Grant Leonard who recorded the last out of the eighth and pitched a scoreless ninth, notching the save. Zeb Adreon came through again with a 2 RBI single in the top of the 8th, which would become important in the bottom half of the frame. Scotty Scott recorded his second RBI triple of the day to bring the Rainbow Warriors within two. That was all the closer the game became. Chris Whelan did not play due to injury.

Iowa looked to have the fourth and final game all locked up, but Hawaii had other plans. Hawaii scored seven unanswered runs to stun the Hawkeyes in extra innings. Iowa was down to the final out with reliever Kyle Shimp on the bump. Shimp walked the batter and then continued to throw three straight wild pitches to tie the game up. Hawaii First Basemen Alex Baeza won the game in the bottom of the 10th with a single to right, walking off on the Hawks. The middle of the Hawkeyes had a strong day, with seven combined hits from their four and five hitters. Ben Norman was 3-5 with a double, homer, and 3 RBI’s. Teammate Tanner Pedget was 4-5 with two runs batted in and a double. The rest of the Hawkeye lineup provided three hits. Winning pitcher Dylan Thomas struck out nine of the eighteen batters he went up against. This was a very disappointing game for the Hawkeyes to lose. They had it in the bag, and let it get away. This is the kind of loss that can come back and bite you in the butt later in the season.

Iowa travels to Stillwater this weekend for a three-game series with number 19 Oklahoma State. If they can take two of three that would be a major success, but is a huge question if they can even steal one game from the Cowboys.