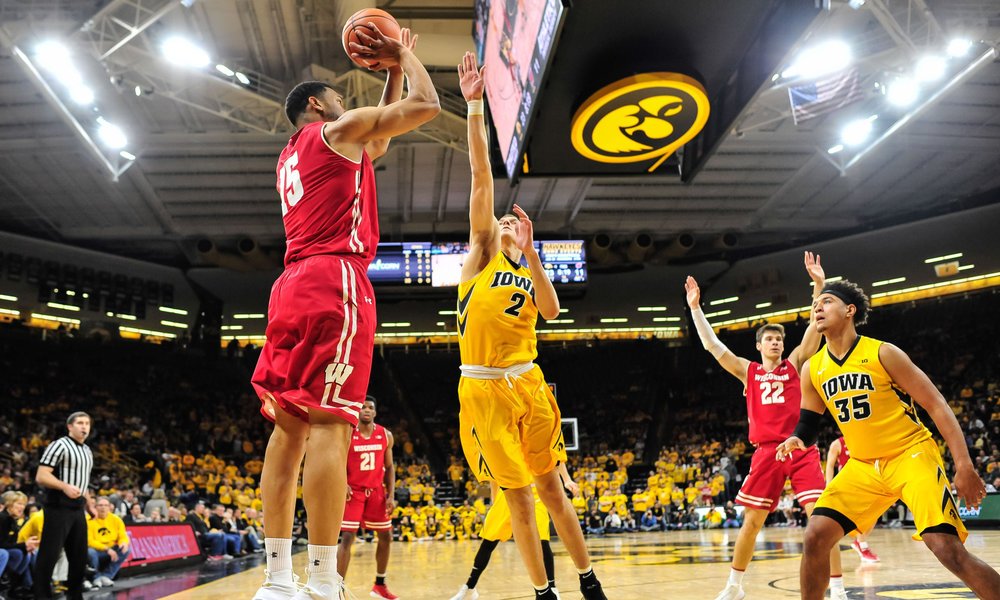 After knocking off, then ranked #7, Michigan on February 1, the Hawks have since gone 4-3 and have been outscored by twenty-one points over that stretch. Despite their recent struggles, Iowa (21-8, 10-8) still have plenty of opportunity ahead of them this season. The first of these opportunities is a match-up with 21st ranked Wisconsin (20-9, 12-6)  in Madison on Thursday.

In the previous match-up on November 30 the Badgers escaped Carver with a 72-66 win.  D’Mitrik Trice led the way for Wisconsin with a game high 20 points, including a 4 of 8 performance from distance.  Big Ten Player of the Year candidate, Ian Happ, scored 13 and Brevin Pritzl chipped in 12 off the bench in the victory. Tyler Cook paced the Hawkeyes in the first match-up, finishing with 19, Luka Garza and Jordan Bohannon each had 11.  The biggest difference in the first game were the team’s field goal percentages. Wisconsin hit on 27 of 56 field goal attempts (48.2%) whereas the Hawks scored on 23 of 59 attempts (38.9%).

Coming into Thursday’s match-up, Wisconsin is led by senior forward Ethan Happ.  Happ (6-10 237) averages 17.8 ppg. He also leads the team in rebounds (10.1 rpg.) and assists (4.7 apg.). The biggest weakness in Happ’s game comes at the free throw line. The senior is shooting a mere 45% from the charity stripe this season.  D’Mitrik Trice (12.3 ppg.) and Brad Davidson (11.0 ppg.) also score double figures for the Badgers. Trice, and Brevin Pritzl are the team’s top perimeter shooters connecting on 42.2% and 45.5% of the threes respectively. Wisconsin bodes one of the top defenses, not only in the Big Ten, but in the entire country.  The Badgers are 3rd in the league in defensive average allowing only 61.6 ppg, this total places them 11th in all of Division I basketball. Offensively, Wisconsin is not as prolific. The Badgers average 69.7 ppg. which places them 10th in the conference. Despite the low offensive production, however, Wisconsin is quite efficient.  The Badgers shoot 45.9% from the field, which places them 3rd in the conference, and 38.2% from distance, which is tops in the league. They also take care of the basketball, committing a mere 9.2 turnovers per contest, which is 3rd in the Big Ten.

The Kohl Center has not been too kind to visitors this season. The Badgers are 11-3 at home this season, and the Hawkeyes have dropped 13 of 16 there since the 2000-01 season. However, one of those wins came the last time Iowa visited, in March of 2017.

In the Hawkeyes last four games, three of which have been loses, Iowa is shooting 39% from the field and only 29% from three point range. In comparison their opponents have shot 45% from the field and 37% on triples.  In the three most recent losses the Hawks have allowed 11, 12 and 12 made three point field goals, this and the fact that the Badgers are a tremendous three point shooting team make perimeter defense a huge factor in Thursday’s contest.