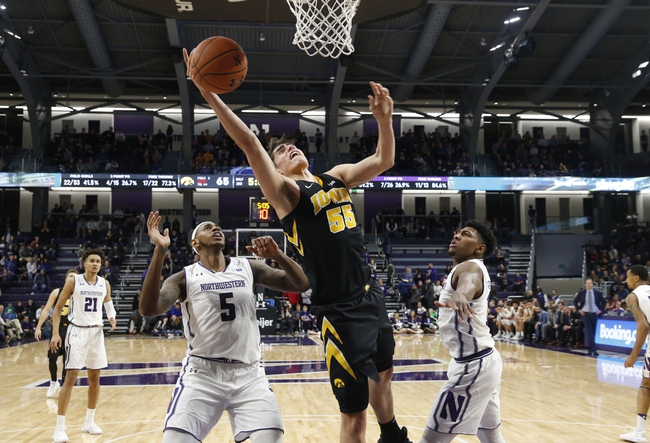 The Hawkeyes will try to do something Sunday that hasn’t been done since the 2013-14 campaign; sweep Northwestern in the regular season. Each of the past three years Iowa has only played the Wildcats once in conference play. Iowa won the match-up last season and in 2015-16, and Northwestern took the game in 2017-18. The two teams split in the 2014-15 season, but in 2013-14 Iowa won both regular season games before bowing out to Northwestern in the Big Ten Tournament. The attempt at the regular season sweep this year was made possible thanks to Iowa’s 73-63 win at Evanston on January 9.

In their first meeting Iowa was without leading scorer Tyler Cook, who was out with a sore knee. Despite being short-handed the Hawkeyes were able to make the last run in a game filled with runs to pull out the victory. Iowa started the game on January 9th with a 9-2 lead, but Northwestern quickly answered with an 11-4 run to tie the game.  Iowa responded by rattling off nine unanswered, but once again the Wildcats retaliated; ending the half on a 7-2 run to knot the game at 34 at the break. Northwestern’s wave continued in the 2nd half, as they took their biggest lead of the game, 44-37 at the 16:18 mark, on an AJ Turner triple. However, Iowa bounced back and took the lead for good when freshman Joe Wieskamp’s three capped a 10-2 spurt to put the Hawks up 47-46 with 13:48 to play. Jordan Bohannon closed the game out scoring 6 points in the final three minutes, including a pair of free throws with 0:35 seconds to play to ice it. Wieskamp led all scorers with 19 points and Luka Garza added 16 points off the bench to lead the Hawks. Vic Law and Anthony Gaines scored 13 each to pace the Cats. The difference in the game, like many of Iowa’s wins this season, came at the free throw line.  Iowa knocked down 21 of 26 (81%) at the charity stripe, while the Wildcats made 12 of their 16 (75%) attempts.


Northwestern (12-10, 3-8) comes into Iowa City losers of three straight.  The Wildcats are 1-5 away from Welsh-Ryan Arena his season, with their only road win coming at Rutgers. Northwestern, who is 27-27 since the schools first NCAA tournament bid in 2017, is a senior heavy team.  The Wildcats top three scorers, Vic Law (15.0 ppg.) Derek Pardon (14.0 ppg.) and Ryan Taylor (11.4 ppg.) are all seniors. The Wildcats are 13th in the league in scoring average netting only 67.7 points per game. They are, however, 4th in the conference in defensive scoring average, allowing only 64.3 points a contest. Northwestern is currently 12th in the Big Ten standings while the Hawkeyes (18-5, 7-5) sit 6th. One advantage Northwestern may have this time around, is that they will come into Carver rested.  The Wildcats haven’t played since Monday, while the Hawks, winners at Indiana Thursday, have only had two days off.


Like the first meeting, the free throw line should play a huge role in the sequel. Iowa is tops in the Big Ten and 7th in the country in free throw attempts with 575 and 1st in the nation and conference in free throws made at 432.  With Iowa’s recent game plan of getting paint touches, the huge size advantage they’ll have, and the fact that the Wildcats are 11th in the Big Ten in fouls committed (18 per game) the parade to the free throw line should continue for Hawkeyes in this one. Iowa’s keys to victory: attack the rim in transition (play this game in the 80s), post touches for Cook, Garza and Kriener, and hit the inside-out three.

Thomas Hartlieb to Carry on Family Tradition as a Walk-On