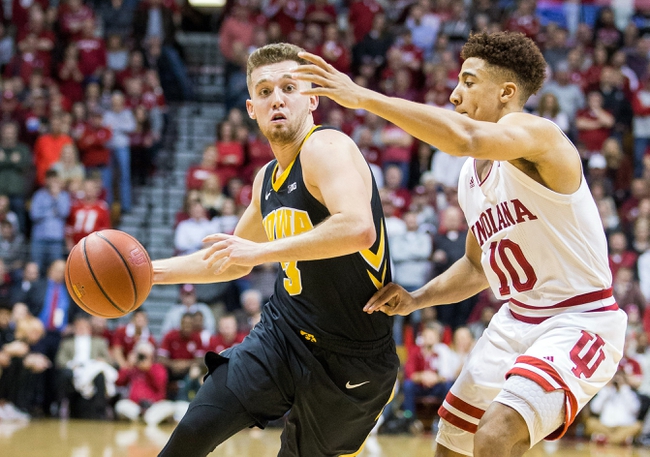 Well it turns out the heart-attack-Hawks’ luck finally ran out. Although it looked like the Hawks may pull-out a third straight walk-off win after two games of consecutive game-winning shots, unfortunately, the shots didn’t fall against Maryland. Maryland made 12, yes 12 three-pointers, and escaped Carver Hawkeye Arena with a narrow 66-65 win after Bohannon’s jumper and Moss’s put back attempts failed to find the bottom of the net.

But, if you shoot less than 33% for the game as the Hawks did, it’s pretty difficult to come away with win. As if the previous two games weren’t evidence enough, the fact that the Hawks still had a chance to come from behind and beat Maryland only further proves that this year’s Hawks are a gritty bunch that can’t be counted out. So, there’s still plenty to look forward to the rest of the season as the Hawks still have 5 games left before what’s sure to be a chaotic B10 Conference Tourney.

Although a win against a tough Terrapin team Tuesday night would have positioned the Hawks well to secure a top four seed and double bye in the B10 Conference Tournament, there’s still difficult road trips to Columbus and Madison in the coming weeks. Needless to say, there’s plenty for the Hawks to play for. First up is an 8pm tilt against a reeling Indiana team Friday night in Carver before finishing the season with 3 of the last 4 on the road.

Indiana comes into the game at 13-13 (4-11 in the B10) having dropped 11 of their last 12 games, with the lone win coming against Michigan State in overtime three weeks ago. Nonetheless, there’s every reason to believe that Friday night’s game will be a competitive one. Indiana has lost a lot this season, but they’ve been competitive in many of their losses. Despite leading for most of their game against Purdue Tuesday night, Indiana fell 48-46 to the Boilermakers. And two weeks ago the Hawks barely managed to squeak out a 77-72 win Bloomington.

Combine the Hoosiers potential with the Hawks recent knack of playing dramatic one possession games and this one could be interesting. Indiana’s star—and likely All-Big-Ten first teamer—Romeo Langford is a consistent double-digit scorer, averaging 17ppg on the year. He’ll be tasked with shutting down a red-hot Jordan Bohannon who is averaging 18ppg in the last four games after averaging only 6ppg in the previous four.

Inside, it’ll be Indiana big-man Juwan Morgan battling with Tyler Cook and Luka Garza. Cook and Garza will almost certainly have to best Morgan if the Hawks want to get back on the winning track. Morgan is a beast inside for the Hoosiers averaging 15ppg and 8rpg. And while Cook comes into the game as the Hawk’s leading scorer at 16ppg and 8rpg, he’ll need to be himself. Maryland’s star big-man Bruno Fernando bullied Cook all night long Tuesday, holding Cook to just 4 total shot attempts and a meager 6pts. Cook will have to be aggressive, asserting himself and drawing fouls as he has done all season long, to score near his season average.

Garza will have to be better too. After averaging 20ppg during a 7-game stretch just last month, Garza is averaging just 4ppg over the Hawks’ last 4. Thankfully, Bohannon and Moss have stepped up during Garza’s slump. Bohannon’s late game clutch shooting from behind the arc and at the free-throw line have been duly needed. But as the last game showed, the Hawks can’t rely on pulling out magical wins every game. The bigs—Cook and Garza—need to return to form, for the Hawks to handle the Hoosiers.

The play of the ‘bigs’ will be a big factor in this one; however, shooting might be the biggest factor. If Iowa’s shooting is on par with its season average of 46%, the Hawks have the ability to run away with this one. Three shooters—Bohannon, Weiskamp, and Moss—all shoot north of 40% from behind the arc and are capable of delivering. Bohannon and Weezy each have a game-winner while the suddenly aggressive Isiah Moss is quietly coming off of his second double-double of the season and averaging 15ppg over the last 3 games. If two of the Hawks three shooters can get to the 15+ point range, the Hawks should have no problem getting to 21-6 overall and 10-6 in the B10 because on paper Indiana simply doesn’t have the shooters to keep up with the Hawks.

Games aren’t played on paper though. If they were then Maryland wouldn’t have made 12 three-pointers, Weezy wouldn’t have been 0 of 5 from the field, and Iowa wouldn’t have lost. In reality, Maryland point guard Anthony Cowan Jr. made 5 three-pointers and wasn’t whistled for a foul on Bohannon’s last second shot (Here is a Twitter thread with both players’ thoughts on the pivotal shot.)

Therefore, the Hawks will need to flush the Maryland loss and focus on a more than capable Indiana team to make sure that the product on the court emulates what the stats say should happen.

There’s 5 games left in the regular season and the Hawks will need to execute in each and every game if they expect to win. Shooting better and making sure ‘the bigs’ get involved will be key not just for this game, but for the rest of the season if the Hawks hope to make a run in March.

*All statistics courtesy of www.espn.com/mens-co…