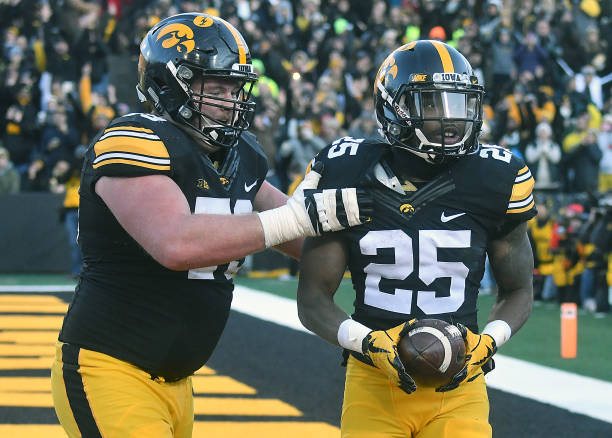 ALTOONA, IA – A couple of Hawkeyes will sport their Iowa helmets one last time when they strap up for the Reese’s Senior Bowl on Saturday, January 27th. RB Akrum Wadley and OL Sean Welsh will both play, while LB Josey Jewell declined his invitation.

Akrum Wadley struggled on his first day of practice but knocked it out of the park on the 2nd day. Here are some of the tweets during practice from scouts and other bystanders:

Iowa RB Akrum Wadley was rough yesterday. His route-running technique was often poor, hopping into breaks with funky throttle down. NFL LBs are going to easily knock him off course. Checked in under 190 pounds.

Cool drill for RBs courtesy of the Broncos during the North practice today at the Senior Bowl. This is Iowa’s Akrum Wadley showing some agility “through the forest” – well, except for that last tree. pic.twitter.com/bewx…

Akrum Wadley was devastating in one-on-one drills with linebackers. Unguardable.

Sean Welsh has had his ups and downs during Senior Bowl practice as well:

The Not So Good:

NC State DT Justin Jones showing his power with a bull rush vs. Iowa's Sean Welsh at the #SeniorBowl pic.twitter.com/Y7uG…

Senior Bowl practice day 2 kicks off in about 2 hours so are a few of the players who impressed me the most on day 1: Jaylen Samuels(SAK, NC State), Nathan Shepherd(DTFort Hays State), Michael Joseph(CB, Dubuque), Cedrick Wilson(WR, Boise State) Sean Welsh(G, Iowa).

Josey Jewell declined his invitation to the Reese’s Senior Bowl and here’s why:

Jack Bechta, Josey Jewell's agent, on why client chose to skip Senior Bowl: "Josey is healthy. He was pretty sick during and after the Pinstripe Bowl. He lost some weight and took awhile to recover. He just wants to focus on the Combine and stand on his body of work."

Josey Jewell/LB/Iowa announced as a decline invitation from #SeniorBowl. Was not an injury decline. A groan came up from several scouts.

Former Hawks We Would Like to See in the XFL