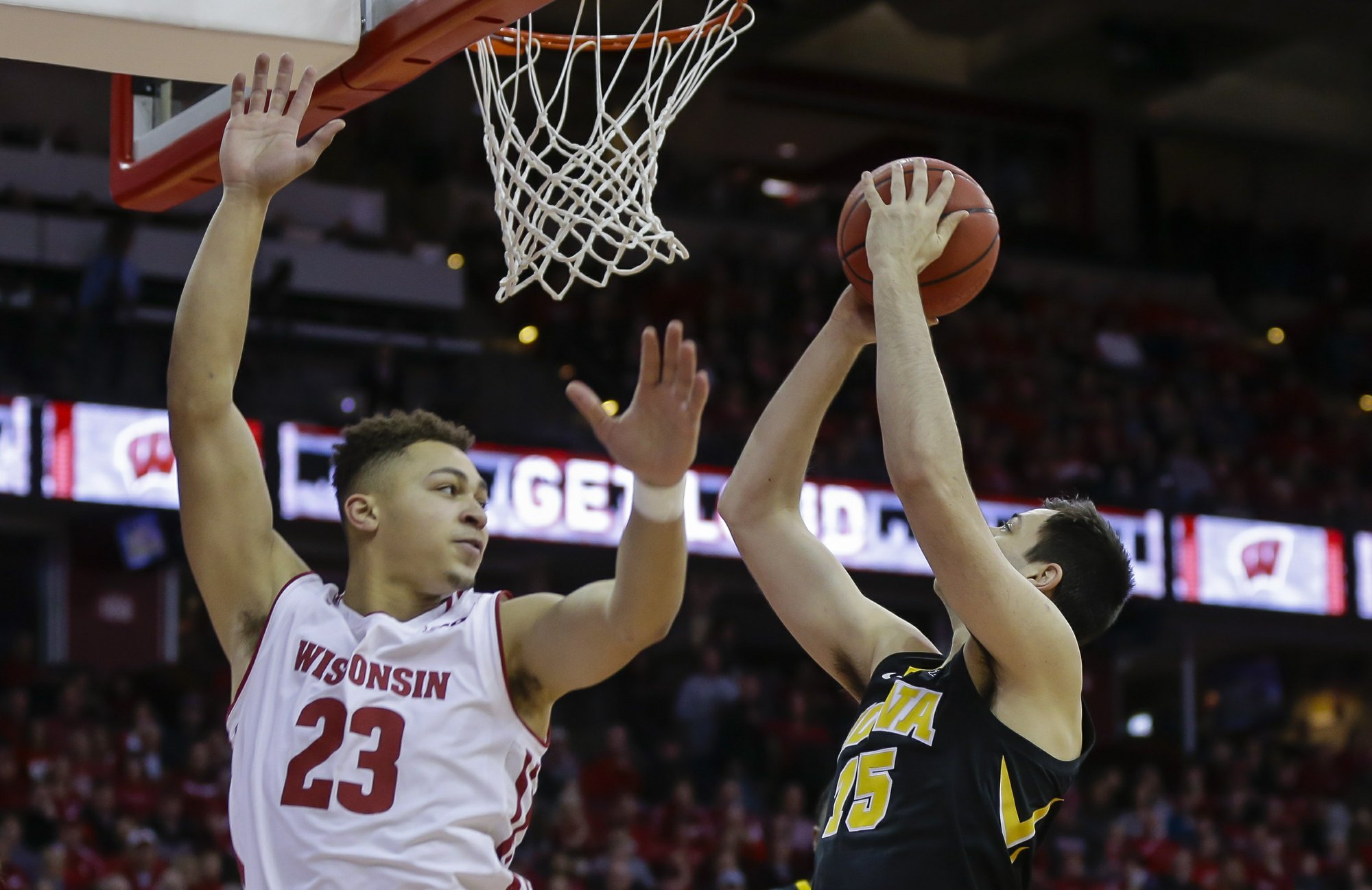 Iowa’s string of bad play continued as they struggled the first few opening possessions once again and just never seem to find their niche on either end of the floor. Wisconsin’s Senior night couldn’t of gone any better for Ethan Happ, Khalil Iverson and Charles Thomas IV over 40 minutes of action tonight, they showed up ready to battle from tip-off and in turn resulted in a 65-45 route.

Iowa is 21-8( 10-8) coming off two double digit losses last week at Ohio State and then at home against Rutgers on Nicholas Baer’s senior day. Wisconsin is 20-9 (12-8) ranked 21st in the nation, went 1-1 last week falling in double overtime to the streaky Indiana Hoosiers and then taking care of business against the Nittany Lions of Pennsylvania.  The first meeting between Iowa and Wisconsin took place back on November 30th with Wisconsin winning 72-66, Iowa went 6-24 from three which shows the grit and grind the players have to stay focused even when shots aren’t falling.

For the first five minutes of action it was back-n-forth with Iowa taking an 11-8 lead on a Nicholas Baer three and about a minute later Aleem Ford answered with a three to tie it at eleven heading into the 12-minute media timeout. By the four minute media timeout Iowa was trailing 24-15 shooting just 25% from the field. There wasn’t a lot going right for Iowa as Wisconsin was playing excellent defense denying the post passes and forcing contested out of rhythm shots. Iowa defensively was primarily in zone and Wisconsin would struggle at times against it, but more often then not Wisconsin would find the mismatch over the 30 second shot clock and get a high quality look at the rim.

Iowa trails entering half 31-22.To be down only by nine after having 8 turnovers, shooting only 29% and committing twelve team fouls is a sliver of good news, but a near perfect second half was needed for a different final result. Iowa is known for it’s ability to keep opposing teams of the offensive boards, that was false tonight as five first half offensive boards resulted in 12 second chance Wisconsin points. Another troubling statistic was the free throw disparity as Iowa only got to the line four times versus Wisconsin’s fourteen in the first twenty minutes. It was like the Iowa team had no energy in Kohl Center as they walked onto the floor. Wisconsin won every loose ball situation, fought off screens and attack the basket with force to get to the free throw line often.

It was hard to imagine the 2nd half off being worst then the first half but by the 12-minute mark Iowa was shooting 3-11 and at 12-minute media timeout Wisconsin had a 20 point lead(48-28). The play that summed up the game was with 6:38 left Isaiah Moss had a point blank layup and out of nowhere Khalil Iverson came out of nowhere to block the shot. Wisconsin even up roughly twenty was still playing with that same high intensity energy that carried them in the first half and Iowa was playing with no sense of urgency like we seen that helped them go undefeated in non-conference and rebound from an 0-2 conference start. With the game well decided Marshon Dailey, Austin Ash, and Riley Till all saw extended minutes.

Iowa ended the game shooting 31%, struggling from three(5-22) and only getting to the free throw line six times, which is their bread and butter and greatest strength due to the incredibly high percentage as a team(74%). Iowa was leading in scoring by Kriener and Bohannon with eight a piece. Cook was held scoreless in 24 minutes of action.  Iowa did have almost twice as many fouls 25 to Wisconsin 13, but again that comes back to being aggressive and while some fouls were questionable, that isn’t anywhere close to why Iowa loss. With fouls comes foul trouble and that was clear to the bigs as Garza, Cook, Baer, and Kriener all were constantly shuffling which almost makes developing consistency difficult.

Wisconsin deserves a ton of credit in every aspect, they flat out out-competed, out-hustled, bodied-up on defense, and seized the opportunity. Ethan Happ final performance in the Kohl Center was a dandy as he had 21 points and shooting above his season average of 45% from the line going 11-18, adding 14 rebounds and three assists. Khalil Iverson was the only other Badger to score in double figures with 11.

These types of games are hard to watch for all of us, and beyond frustrating for the players. Sometimes that frustration leads to being brutally honest like this recap, but at the end of the day we can’t overreact as critical as we can be in the moment. This team still has the potential to finish strong in the Big Ten Tournament and NCAA Tournament. Iowa has to flush this one down the toilet quickly as they travel to Nebraska Sunday for an 1 P.M regular season finale. Nebraska has lost four in a row and is sitting 15-15(5-14) on the season. Iowa Head Coach Fran McCaffery returns to the sideline as his suspension has been served, which is a huge positive for all of Hawkeye Nation.