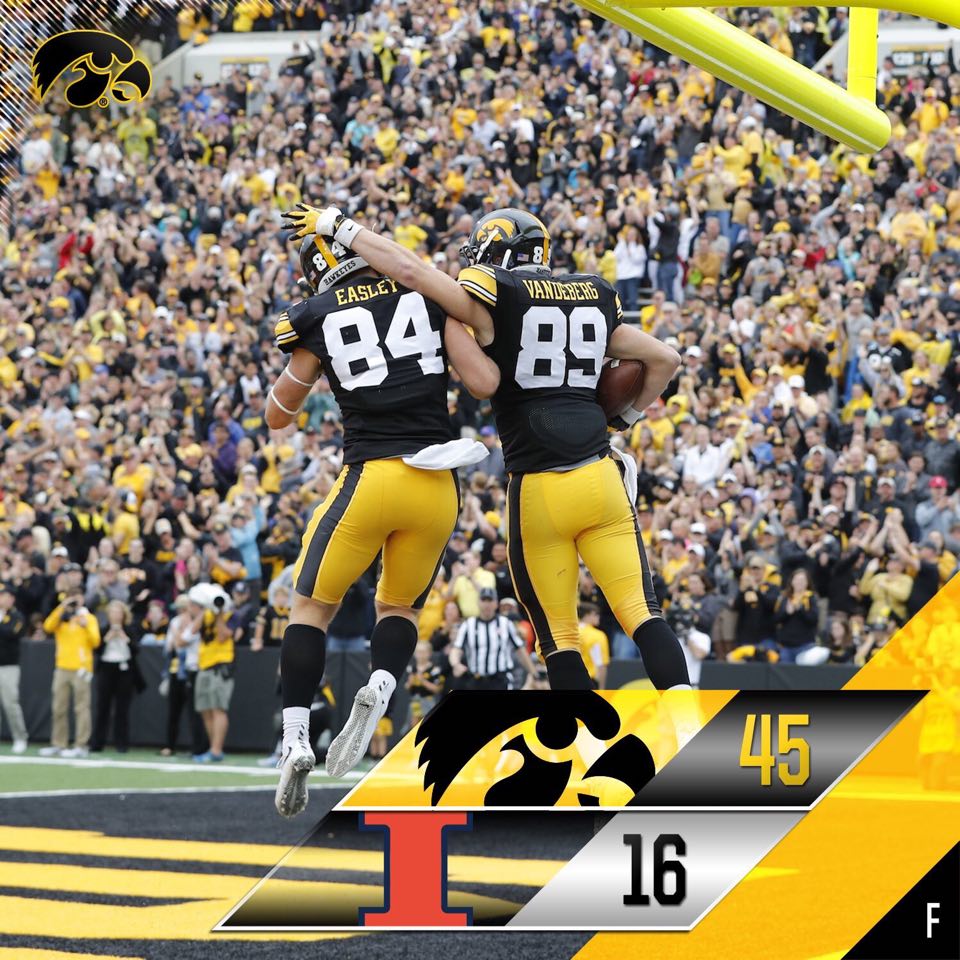 IOWA CITY – Clouds of recent disappointment seemed to sill be looming over Kinnick Stadium throughout most of the first half. The clouds in the sky never subsided, but the Hawkeyes, at long last, managed to shine.

The Hawkeyes beat the Illinois Fighting Illini 45-16 behind a 28-point second half for an Iowa team that still seemed to be feeling the effects of the poor outing at Michigan State.

“It didn’t come easy, and we didn’t expect it to,” said Iowa Head Coach Kirk Ferentz. “Just very proud of our guys… we played a lot of good, complementary football out there.”

To start the game, it looked as though the gloomy, rainy, cloudy weather was going to translate to the performance on the field.

On the first play from scrimmage, Anthony Nelson sacked Illini quarterback Jeff George Jr., jarring the ball loose as the Hawkeyes fell on the early fumble. Just three plays later, Ivory Kelly-Martin fumbled and gave the ball right back to the Illini, who drove down field for a field goal, taking an early 3-0 lead.

The Hawkeyes responded with a 75-yard drive of their own, this one capped off by a five-yard touchdown pass from Nate Stanley to Nick Easley.

An illegal hands-to-the-face penalty on Illinois set the ensuing kickoff up at the 50 yard line, so the Hawkeyes got fancy. Miguel Recinos’ on-side kick was recovered by Matt Hankins, but the Hawkeyes came up empty after failing to convert on fourth down later in the drive.

The Illini drove again, but George, Jr. was picked off in the end zone by Amani Hooker. The takeaway set up a 60-yard field goal drive that gave the Hawkeyes a 10-7 lead.

Again, the Illini bounced back and went 85 yards down the field to tie the game. Ra’Von Bonner punched one in from two yards out to knot it up at 10-10.

More turnovers were still to come. This time it was Stanley that was intercepted by Bennett Williams after he overthrew Easley. The Illini would add another field goal to take a 13-10 lead.

Stanley led the Hawkeyes downfield on the next drive, taking a lead 17-13 lead before halftime. This time, it was Akrum Wadley that caught a short two-yard pass from Stanley. That drive was kept alive by an 18-yard run from Hooker on a fake punt.

Turnovers and lead changes were the stories of the game going into halftime. Each team had a fumble and an interception. Neither team seemed capable of being in a rhythm for more than one drive at a time.

Out of halftime, the tides didn’t appear to shift.

Each of Iowa’s first two possessions in the second half resulted in three-and-outs, as did Illinois’ first chance to control the ball. The second half was off to an even worse start than the first half.

Illinois started to drive on its second possession and managed to get into Iowa territory.

Snyder picked off an over throw from George, Jr. and took off down the sideline. Untouched, Snyder completed an 89-yard pick-six in his first game back since tearing his ACL just five and a half months ago.

“That was the play we needed to pick us up a little bit,” Ferentz said. “To come up with that play to get the interception was big, and the to turn it into points was even bigger.”

Iowa dominated the game from that point on.

On each of its next two possessions, Iowa found the end zone. First, it was Matt VandeBerg on a quick slant from 39 yards out, then Wadley beat a pair of defenders to the pylon to finish an 18-yard run.

The Iowa defense allowed just a field goal in the entire second half, something Hawkeye fans have come to expect. Opponents haven’t scored a second half touchdown against Iowa since Juwan Johnson’s walk-off for Penn State.

With the Hawkeyes already up big, Tyler Wiegers hit Kelly-Martin for a three-yard touchdown to put the finally touches on the rout. The Hawkeyes prevailed 45-16.

Snyder’s interception return completely turned things around for Iowa. When they needed a spark, it was the junior safety, fresh off injury, who was there for his teammates.

“I was just trying to take in the moment… and just how cool it is to be back in Kinnick Stadium and be healthy,” Snyder said. “It’s something that you miss, its something that I take for granted, but I appreciate it a lot more through this.”

The energy from Snyder helped give the Hawkeyes the boost they needed to get their first conference win of the season. Josey Jewell and Bo Bower led the team in tackles with 10 each.

Stanley had his share of struggles on the day. The Iowa quarterback was 17-for-32 for 247 yards, three touchdowns, and an interception. Wadley carried the ball 23 times for 115 yards and caught two passes for 14 yards. He had one rushing and one receiving the touchdown. Easley was the leading receiver on the day, catching seven passes for 59 yards and a touchdown.

True freshman Tristan Wirfs made his first career start at right tackle, and true freshman Ryan Gersonde made his Iowa debut at punter. Greened makes 10 true freshmen to play for the Hawkeyes this season.

Get to Know the Enemy Week 6 – Illinois