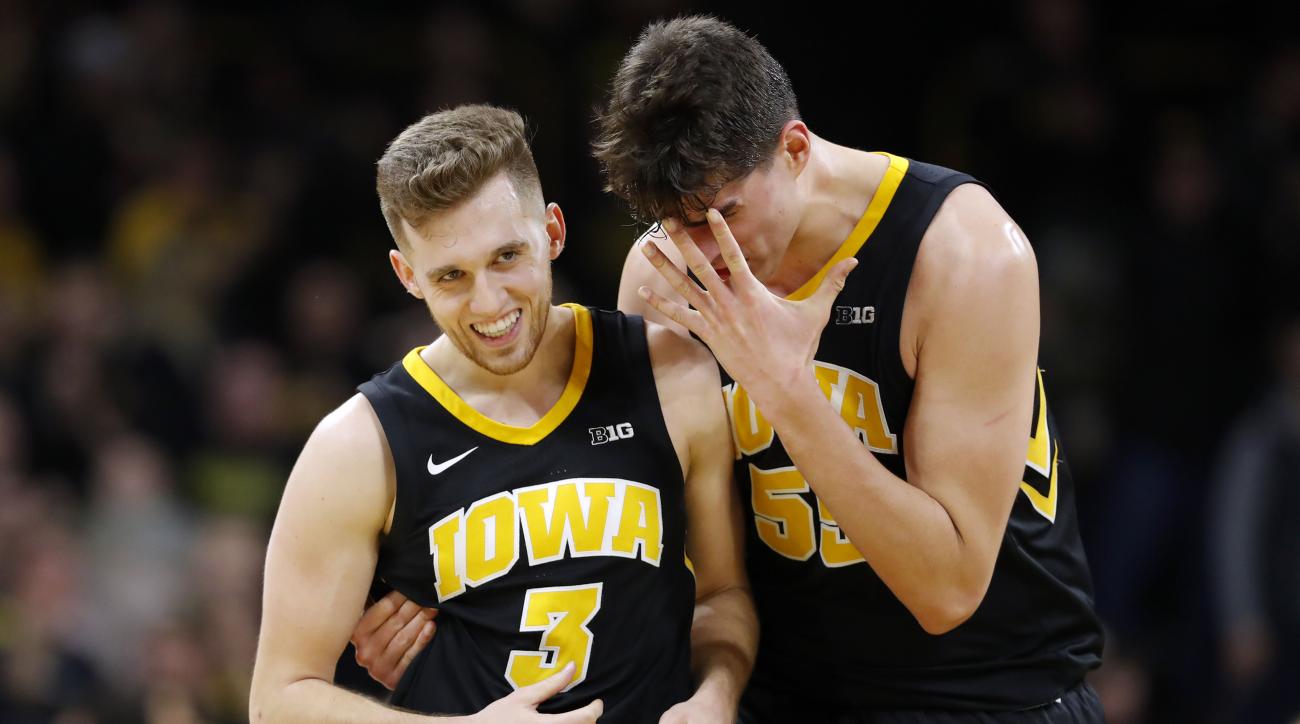 For much of the night the three wasn’t falling for the Hawkeyes as Indiana’s 2nd half lead ranged from 4-7, but the late game heroics delivered by Bohannon once again,were much too familiar to Hoosier fans going back just a mere 15 days to Assembly Hall. The #21 Hawkeyes used that late game magic to the delight of the sold-out Carver Arena on “Blackout Night” to complete the season sweep over the Indiana Hoosiers 76-70.

Both teams were coming off identical heartbreaking losses from Tuesday as Iowa fell to Maryland on a Bruno Fernando tip-in and Indiana loss to Purdue on a Matt Haarm’s tip-in. Iowa took the first meeting at Assembly Hall on Feb. 7th, 77-72, behind 25 points and five threes from Bohannan and 21 points from Cook. Indiana star Freshman Guard Romeo Langford had 22 for Indiana. This meeting tonight was a must win for both teams, Iowa fighting for seeding and hopes for a double-bye afloat in the Big Ten Tournament. Indiana needed this game for their resume as the chances of an NCAA Tournament bid are becoming dim.

The first half was a fast pace right out of the gate as Indiana showed their physicality early jumping to an early 8-0 lead three minutes in as Iowa struggled just to get quality looks. Iowa fought back though via the offensive glass and cutting action from the bigs of Luka Garza, Tyler Cook and Ryan Kriener tying the score at 15 behind five straight points by Garza. Kriener gave Iowa it’s first lead at 17-15 around the 8-minute media timeout, as he was seeing extended action with Garza on the bench with two fouls. Iowa switched to a zone defense after the early lead by Indiana and that really halted their offense as they struggled to get it in the post, forcing them to settle for contested twos and threes. Iowa ended the half with three beautiful plays around the rim as Cook found Kriener for a dunk, then Cook had a dunk of his own and finally Joe Wieskamp converted an And-One on a layup. With the score heading into half at 28-all, you knew this was going to be a close-knit second half.

Looking at the box score from the first half, the numbers were identical, both shot 40 percent with six turnovers apiece. As expected Iowa got to the free throw line eleven times converting eight of them, but the glaring stat was zero three pointers on eight attempts. For me, I’d look at that and feel pretty good that we’re tied going into half, for the players it had to be frustrating. Some were open looks, some were contested but they just weren’t falling for Bohannon, Moss, Wieskamp, Garza, or Kriener. On the flip side Indiana with having major foul trouble got a boost off the bench from Evan Fitzner having six points by the break.

The second half started much of the same for Iowa as a couple missed shots compounded with a shot clock violation, allowed Indiana to go on a quick 6-0 run out of the break to lead 34-28. After a Cook free throw, Iowa had a beautiful trap defense near half-court leading to a loose ball and guys diving for it, Cook came up with it and dribbled into the lane kicking it out to Moss for Iowa’s first three of the game with 17:13 left in the second half. The battle continued as Indiana lead never grew greater than seven, Iowa would cut the deficit to two or three whether that was Nicholas Baer hitting a three at 11:51 or Bohannon scoring his first basket also a  three at 10:51. Every punch by Iowa  to gain momentum was met with a counter-punch by Indiana much like Rocky versus Creed.

Juwan Morgan hit a three for Indiana to push their lead to 62-56 with 2:27 remaining and Bohannon got to the line to make it 62-58 ten seconds later. Indiana was using the clock to their favor and after a nice block by Baer resulting in a jump ball possession Iowa. Cook tipped in a alley-oop from Bohannon to cut the lead to two with 1:31 remaining. After an Iowa timeout and another beautiful trap, Indiana was forced to burn a timeout. Romeo Langford drove the lane and plowed into a set Garza for an offensive foul. That was Garza’s second charge taken of the game. With one minute remaining Bohannon rebounded his own miss and found Moss who missed, which was rebounded by Cook and stripped by Rob Phinisee on the way down. He was intentionally fouled by Baer. Phinisee made one free-throw to push the lead to three with 38 seconds left. Bohannon comes off a screen and takes a dribble stepback pulling up from three near the  right corner…..Swish!! Tied at 63 with 25 seconds left. Langford misses his stepback three over the outstretched Garza for the win and the game headed to a 5-minute Overtime.

Fran had this to say when asked about that three, “Great execution and a big shot by a great player.”

Tyler Cook scored the first basket in overtime on the assist from Connor McCaffrey with 3:23 left. Indiana answered right back to tie it at 65 with free throws from Juwan Morgan. Bohannon missed a three which was rebounded by Garza only to pass it right back to Bohannon who made the second look. De’Ron Davis came right back completing a three point play after drawing a Garza foul under the basket tying it once again(68). Bohannon drills another three on a busted play with the clock running down 71-68 with 2:01 remaining. Cook hits one of two free throws extending it to a two possession game. Lankford misses three, Morgan rebounds and scores to make it 72-70. Connor MCcaffery dribbles into trouble and has to burn a timeout. Out of the timeout, who ends up with it? Bohannon and just like that, a shot goes up and another three rings in making it 75-70 with 23 seconds left. McCaffery adds a late free throw after a miss and Iowa WINS 76-70.

A back-n-forth high tempo game that featured nine ties and ten lead changes ended in another Hawkeye victory bringing their record 21-6(10-6) while Indiana fell to 13-14(4-12). Iowa ended up shooting 41.9 % from the field, as their three pointer woes from Tuesday continued going 7-25. Bohannon scored 12 of the Hawks final 16 points to end up with 17 points(5 three’s), three rebounds and two assists. Cook added 18 with 8 rebounds and Garza added 16 with nine rebounds. Kriener chipped in with 8 large points off the bench. Iowa converted 15 offensive rebounds into 20 second chance points. The Hooisers had five players in double figures Juwan Morgan(15), Romeo Langford(14), Rob Phinisee(13), De’Ron Davis(10) and Evan Fitzner with 11 off the bench. Indiana struggled with the zone defense from Iowa most of the night, but still put themselves in a great position to be there at the end.

Another great defensive effort by the Hawks tonight as the offense struggled to start each half leading to some run-outs for Indiana. The past four games have kept us on the edge of our seats against the bottom half of the Big Ten(exception Maryland). Maryland and Wisconsin will be the teams to check the box scores for these remaining four to five games as the battle for the final double bye is still up for grabs in the Big Ten Tournament. Iowa’s next game is Tuesday at Ohio State 17-9(7-8) with a 6 P.M. tip-off. They play Maryland Saturday at 1 P.M. so you can root for them for seeding purposes.

Hawks Look to Bounce Back vs. Hoosiers