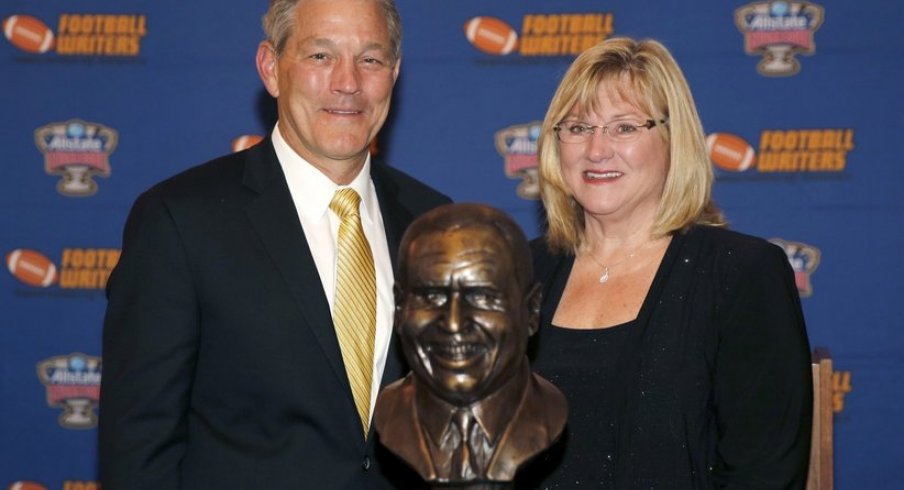 Iowa City – ESPN dropped what they’ve dubbed the “Fan Happiness Index” for each and every FBS program. The interactive post ranks schools fan bases from one to one hundred and twenty eight.
The Hawkeye faithful popped up at number 58 with the label of skeptical, a fair evaluation. Feeling uneasy about a teams chances after the most recent five seasons produced a win total ranging between four and twelve.
If anyone isn’t a slight bit scared before the season kicks off they either know something the rest don’t or they aren’t really a Hawkeye. The index isn’t without skepticism as well.
ESPN based the index on six sets of data. One of those is coaching stability according to Phil Steele’s rankings.
Iowa is listed at 20 out of 100 on coaching stability. The lower the number, the more likely the coach is to be fired. Astonishingly, Iowa is listed only one rating point higher than Nebraska in that category.
It may just be fans optimism, or last years contract extension, but Ferentz isn’t going anywhere. ESPN seems to think the longest tenured coach in the nation is nearing a firing after an 8-5 record. ESPN missed big time on this one.
ESPN has a single perspective that even slightly bring credibility to this rating. Many of Iowa’s assistant coaches changed, but being real, how likely is it that they dug into that with all 128 teams.
According to the index, Ferentz is the second most likely coach in the Big Ten to be fired. Granted some coaches have yet to call a play like Minnesota’s PJ Fleck who is sporting a 94 rating. Ohio State leads the conference with 98.
The most positive rating, and a statement about the fans, Iowa received a 97 in Twitter Buzz. That category is a percentage of positive tweets made by fans. Basically 97-percent of Iowa fans tweets are positive as surprising as that may seem. It is near the nations best. Auburn scored 100 in that category.
The Fan Happiness Index is a neat idea. It combines the product on the field with those watching, making them feel a little more involved. Unfortunately, as with Iowa, some information doesn’t seem to line up with they way things actually are.

By the way, Kirk and Mary Ferentz just donated another 1 million dollars to the University of Iowa Children’s Hospital. They’ve done so a number of times now. This is something that should never be ignored or swept under the rug. Their money is changing lives and saving lives.