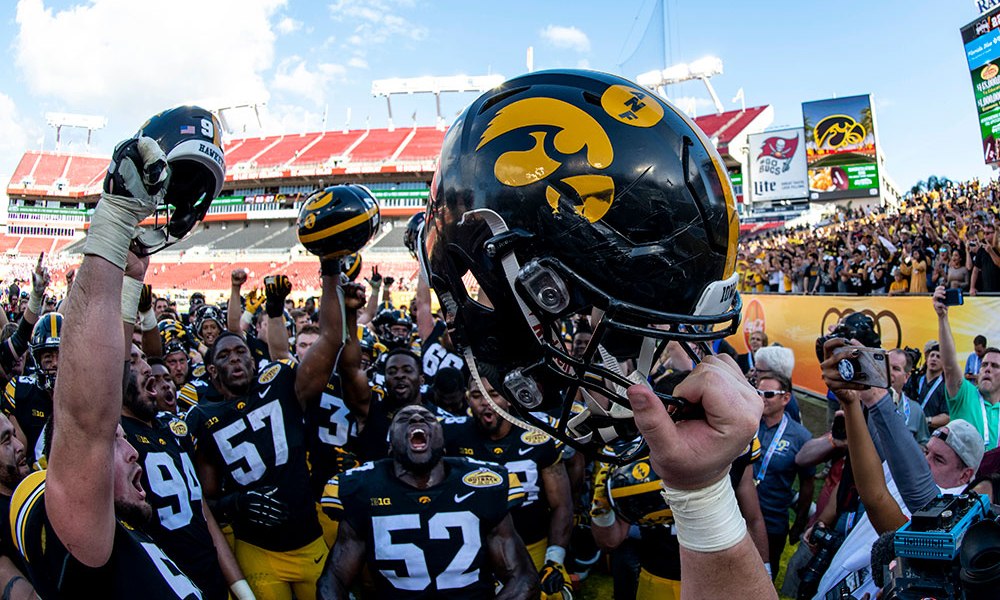 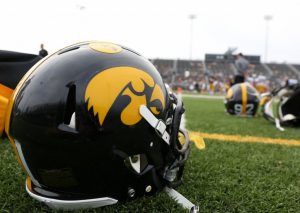 We’re less than 100 days away from the start of the 2019 Hawkeye football season and the anticipation is building. This is the time of the year that preseason prognosticators begin to debut their 2019 rankings. There’s the perennial predictions from popular publications like Athlon Sorts and Sporting News. In today’s day and age there’s a host of other publications pumping out their predictions too.

And with so many publications it’s tough for any of them to agree. Some have the Hawks competing to win the B10 West and others have the Hawks finishing in the bottom half of the division. Needless to say, I wouldn’t put too much stock in any one prediction. After all, it’s the offseason and a lot can happen between now and the fall. For instance, a key player could suddenly get injured or leave the program. Case and point, since the end of the 2018-19 season the Iowa basketball team has seen Tyler Cook declare for the draft, Isaiah Moss and Maishee Dailey transfer, and had Jordan Bohannon undergo a potentially season-ending surgery on his hip.

Still, when one of these other publications, 247 Sports (the recruiting website) puts you at number one on a list, you take notice. Now 247 Sports didn’t rank the Hawks as the best team in the country for the upcoming season, let alone the best team in the B10. But they did rank the Hawks as having the best Defense in the country. That’s a bold statement. Let’s unpack it a bit.

Year after year the Hawks have one of the better defenses in the B10 and country. Last year the Hawks finished 7th in the country in total defense allowing only 28 offensive touchdowns and less than 300YPG. Opponents had a tough time putting up points too as the Hawks finished 10th in country in scoring defense, allowing just under 18PPG. Therefore, given the Hawks’ ranking in these two metrics, there’s certainly reason to expect this year’s team to have a great defense.

And let’s not forget in the 2000s under late Defensive Coordinator Norm Parker the Hawkeye defense earned the reputation of enforcing “6 seconds of hell” during their run of three consecutive stellar seasons from 2002 to 2004. [“6 seconds of hell” is meant to imply that a football play—which usually lasts about 6 seconds—would be hell on the opposing team’s offense given the Iowa defense’s tenacity and talent.

So, there’s certainly precedent to rate Iowa defense for the upcoming season as one of the better ones. If we analyze the defense player-by-player, you can see that the Hawks have a star-studded lineup. According to the Spring football depth chart and some analysis (here is my pre-spring depth chart analysis and post-spring analysis too), the Hawks will return a plethora of productive players from this past season, including potential 2020 first round draft pick AJ Epenesa.

Now if we look outside of the confines of the Hansen Football Performance Center in Iowa City to other programs across the country, how do the Hawks compare. Is 247 Sports justified in ranking the Hawks as the premier defense for the upcoming season?

From 10 to 2, the other teams on 247’s list of best defenses for 2019 are Clemson, Michigan, Georgia, Southern Mississippi, LSU, Miami, Washington, Mississippi State, and Alabama. To be honest, I was a bit surprised that Michigan or Alabama didn’t earn the honor of best defense. But, after some further investigation I began to see why 247 believes other teams on the list won’t have quite as good of defensive units as the Hawks. Clemson, Michigan, LSU, Mississippi State, and Alabama lose a ton of players from last year. These schools all do a great job recruiting, but it’d be taking a bit of leap to expect unproven players to perform at an elite level.

In comparison, although the Hawks lose some big-time players in Matt Nelson, Anthony Nelson, Parker Hesse, Amani Hooker, and Jake Gervase, the cupboards aren’t bare. The D-line return experience and talent with AJ Epenesa, Chauncey Gholston, Brady Reiff, and Cedrick Latimore. Highly touted DT Daviyon Nixon will be in the fold too. Plus, Amani Jones will get a shot as an edge rusher. At linebacker, everybody’s back. Nick Nieman, Djimon Colbert, Kristian Welch, Dillon Doyle, and Seth Benson are more than capable. And at DB there’ a ton of experience as well. Corners Matt Hankins, Julius Brents, Michael Ojmeduia, and safety Geno Stone all played extensively last year. The only relatively fresh faces on D will be DJ Johnson—the likely starter at the Star position (the new hybrid LB/DB position that Amani Hooker played much of last year)—and strong safety Kaevon Merriweather. Nonetheless, both played in reserve roles last year and have had praise heaped on them by coaches.

Still, even with an experienced unit, the Hawks have tough schedule and will have to earn the best D in the country rating (games @ Iowa State, Northwestern, Wisconsin, Michigan, and Nebraska). It will help if the offense can continue to improve under Offensive Coordinator Brian Ferentz in his third year. From year one to two the Hawks made a big leap, but any Hawk fan knows that there are still areas to improve upon. Less three-and-outs, better punting, and fewer offensive turnovers would certainly help the defense out.

By sustaining drives the offense would give the defense needed breathers. This will be especially crucial given the relative lack of proven depth on defense. The Hawks have some stars, but there’s not exactly four- and five-star recruits waiting in line behind them. More like lightly recruited, undersized youngsters. This isn’t to say that the backups can’t be great. They very well could grow into great players. But Iowa is a developmental program meaning that the backups will need some more time to develop before they’re ready for the limelight.

Moreover, better punting and less offensive turnovers will put the defense in better situations. If the Hawks punter—whoever it may be (Sleep-Ferguson, Rastetter, Gersonde)—can consistently flip the field, then opposing offenses won’t be blessed with as good of starting field position. Likewise, if the offense doesn’t turn the ball over, then the defense won’t be put in as many bad positions either. Plus, less turnovers goes hand-in-hand with less pick-sixes (interceptions returned for touchdowns) and scoop-and-scores (fumble recoveries for a touchdown). That will help out the ‘ole scoring defense statistic.

What else will help the Hawkeye defense enforce “6 seconds of hell” and prove that they are one of the best defenses in the country this upcoming season? First and foremost, they’ll need to stay healthy. If stars like Epenesa or Stone were to get injured, the D would likely take a big dip. More to the point, the Hawks will need to keep their DBs healthy. Last year showed us that the Hawks can ill-afford to skate by with backup corners (think the Purdue game). Likely contributors Matt Hankins, Julius Brents, and Michael Ojemudia will need to be on the field as much as possible.

Aside from health, a few other secret ingredients to success are forcing turnovers, getting off the field on third down, and having a bit of luck go your way. If the Hawks can be towards the top the country once again in turnovers, then the defense is likely to be flying high in the metrics. With stars like Epensa and Chauncey Gholston forcing pressure from the book ends of the defensive line and ball-hawking DBs, on paper the Hawks should be poised to get their fair share of turnovers again this year (in 2018 the Hawks were 8th in the country with 27 turnovers forced).

One area the Hawks will need to improve on is getting off of the field on third and fourth down. Last year the Hawks finished 26th in the country, allowing opposing offenses to convert on 34% of their third downs. And on fourth down the Hawks finished 28th, allowing opponents to convert 44% of the time. To this point, the Hawks also allowed opponents to score when entering the red zone 79% of the time—good for 34th in the country. If the Hawks can get better at stopping opponents on third and fourth down, then their red zone defense will improve.

You can’t deny that luck will factor in too. Sometimes opponents make bone-headed plays and the defense capitalizes. Sometimes the ball bounces your way. Sometimes the playing conditions are terrible and offenses struggle. Sometimes an opponent’s key player gets injured. All theses factors and more benefit an opportunistic defense.

And last but not least, just for good measure, I’d be remiss if I didn’t mention one of the top stats that defensive coaches harp on in every press conference: preventing the big play. The Hawks traditionally use a defensive philosophy of ‘bend-don’t break’, forcing the other team to drive the length of field to score. Using this philosophy puts the pressure on the opponent as they have to execute on each and every play. It’s smart football. Therefore, if the Hawks can abide by this philosophy, they’ll likely be esteemed as one of the top defenses. It’s hard for the opponent to win when they can’t get quick-and-easy points on big plays. The Hawks will need to limit coverage busts and open-field tackles (think the Penn St and Purdue games) if they want to be the best. 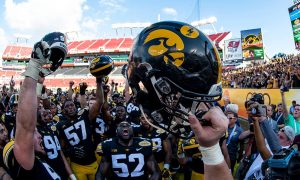 So, all in all, I’d say 247 Sports is justified in rating the Hawks as the best defense in the country for the upcoming season. We return a lot of key contributors, have a standout defensive coordinator in Coach Phil Parker, and traditionally are rated near the top in many of the key metrics (total defense, scoring defense, turnovers forced).

It’s May and if the Spring weather doesn’t have you feeling optimistic, then the potential of the Hawkeye defense should.

*All stats courtesy of www.ncaa.com/stats/f…